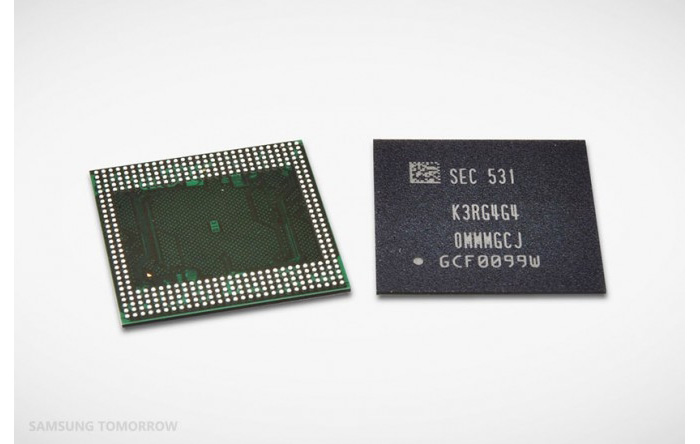 The Korean tech giant Samsung has officially announced new LPDDR4 memory, which is specifically designed for mobile devices. The new memory, as usual, provides both speed increases and lower power consumption, while at the same time offering higher than ever densities.

A single memory chip of the new LPDDR4 generation can house up to 12 Gb of data, while also sporting a simplified design. Thanks to the advanced 20 nm production process the memory offers higher capacities than before. In fact Samsung says the new memory will allow smartphones to house 6 GB of RAM with ease by including four chips of the new memory. The new memory also takes the same space as four chips of the older LPDDR4 memory generation, which allowed capacities of up to 3 GB. Capacity isn’t everything, though so, here comes speed – the new memory offers up to 4266 Mb/sec of bandwidth per lane, which makes it 30 per cent faster than older LPDDR4 memory designs. In addition the power consumption has been lowered by 20 per cent. The end result is faster and cooler memory with higher capacities.

Samsung will sharply increase the production of the new LPDDR4 memory in the coming weeks so there won’t be shortages on the market or so the Korean company believes.