The South Korean tech giant Samsung has officially introduced Galaxy S Duos – a new company smartphone that comes with support for two SIM cards and hardware specs that position it right in the middle of the pack.

The new Samsung smartphone sports a 4-inch TFT display working at 480 x 800 pixels and a 1 GHz processor runs the installed software. For storage the Samsung Galaxy S Duos provides 4 GB of storage space that can be expanded through the use of an integrated microSD card slot, which supports cards with capacities of up to 32 GB. There’s a pair of cameras too – a rear 5 MP camera and a front VGA camera. The Galaxy S Duos also has a built-in FM radio with RDS, Wi-Fi 802.11b/g/n, Bluetooth 3.0, USB 2.0, A-GPS and a 3.5 mm jack for headphones. The battery powering all this comes with a capacity of 1500 mAh. 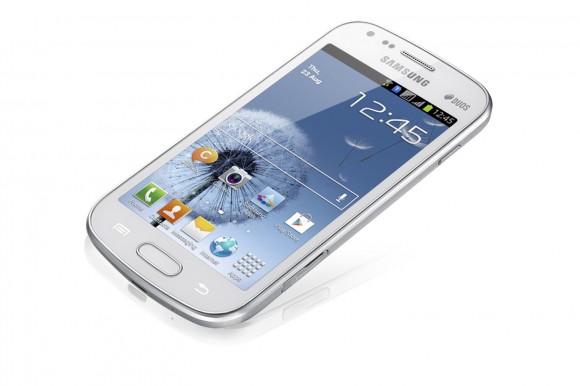 The Samsung Galaxy S Duos is based on Android 4.0 Ice Cream Sandwich. The smartphone will become commercially available in Europe this September. Samsung plans to release the device to other markets too later on.