After months of speculation and leaks the Chinese smartphone maker Xiaomi has presented its rumored Mi 5 flagship smartphone during the on-going MWC 2016 event in Barcelona, Spain. The device will have the hard task of competing with LG’s G5 and Samsung’s S7 smartphones but it might as well do rather well in this battle thanks to the excellent tech specs it comes with. 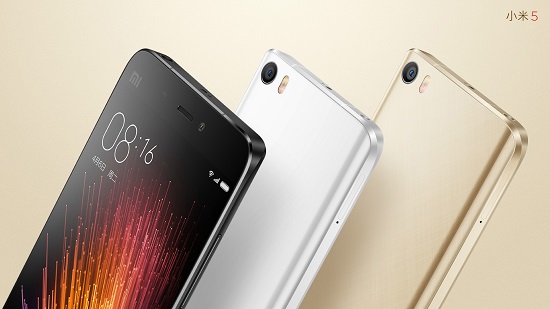 The new Xiaomi Mi 5 comes in three versions – Standard, High and Exclusive. All versions of the new smartphone feature curved backs but up front they all look the same. The main differences among the three models lie in the materials used – the first two versions use Gorilla Glass 4.0 and metal elements for the chassis, while the Exclusive version uses Gorilla Glass 4.0 and ceramic elements. The Xiaomi Mi 5 sports a 5.15-inch IPS display that works at Full HD resolution. The device has a fingerprint sensor, which is located in the Home button and inside it houses a Snapdragon 820 processor that runs at 1.8 GHz (Standard version) and 2.15 GHz for the High and Exclusive versions. The Standard and High versions have 3 GB of RAM and 32 GB and 64 GB of internal memory, respectively, while the Exclusive version has 4 GB of RAM and 128 GB of internal memory. Unfortunately there isn’t a microSD card slot in all of the versions. The smartphones also have a rear 16 MP camera with a Sony IMX298 sensor, autofocus capabilities and an aperture of f/2.0. The rear camera can shoot 4K video as well. Up front there’s a 4 MP UltraPixel camera. The new Xiaomi Mi 5 supports VoLTE, NFC, Wi-Fi 802.11ac, Bluetooth 4.2 and has two slots for SIM cards, a USB Type-C port, and a 3000 mAh battery. The device measures 144.5 x 69.2 x 7.25 mm and weighs 129 grams. Of course, the Mi 5 runs Android 6.0 Marshmallow.

The new smartphone will be in stores on March 1. The Standard version will sell for around USD 300, while the High and Exclusive versions will cost approximately USD 350 and USD 410.