The SMP-N100 has a simple monolithic design, offers built-in 802.11n connectivity, which allows you to connect to the the internet, or stream content from computers or storage devices on a home network, anywhere there’s a TV screen. Its DLNA-compliant, allows ‘plug and play’ connection to all similar devices on the network and play most movie formats, including ivXHD, MKV and AVCHD, audio tracks and display your photos, as well contend from attached USB drives. It also supports full 1080P video output on HDMI, compatibility with the latest high-definition audio codecs, like dts 2.0+Digital Out and DOLBY DIGITAL PLUS. The media device comes loaded with Sony’s XrossMedia Bar user interface and also allows access to BBC iPlayer and Demand Five, watch online video through services such as YouTube, features “Video On Demand powered by Qriocity” giving instant on-demand access to the latest Hollywood blockbusters and classic movies in a choice of HD or standard definition. 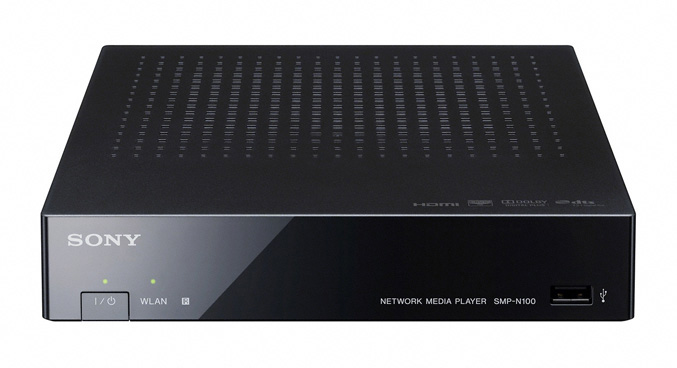 You can also control all your entertainment using an iPhone, iPod Touch or any device running Android, using free apps available from the Apple App Store or the Android Market. The SMP-N100 feature Sony’s IP Content Noise Reduction to improve streamed video and optimising the picture quality. The network player can be connected to a TV sets via composite, component, or HDMI, also offers optical and electrical digital audio outputs and an Ethernet port in addition to the built-in Wi-Fi.