In the area of low light performance, the GZ-HM1 provides superior results thanks to a new CMOS sensor that boosts sensitivity to four Lux (compared to nine Lux for the previous GZ-HM400) for brilliant recording of 1920 x 1080 Full HD video, with 1080/60p output through the HDMI connection. In camera shake compensation, JVC made improvements in wide angle performance, an area not typically addressed. While most stabilization efforts focus on effectiveness in high zoom ratios, camera shake also occurs at wide angle settings, especially when the camera user is moving along with the subject. In the new GZ-HM1, JVC uses prism technology to provide effective results at the wide angle end of the zoom range. And for better still image quality, the GZ-HM1 delivers real 10 megapixel stills for detailed images. 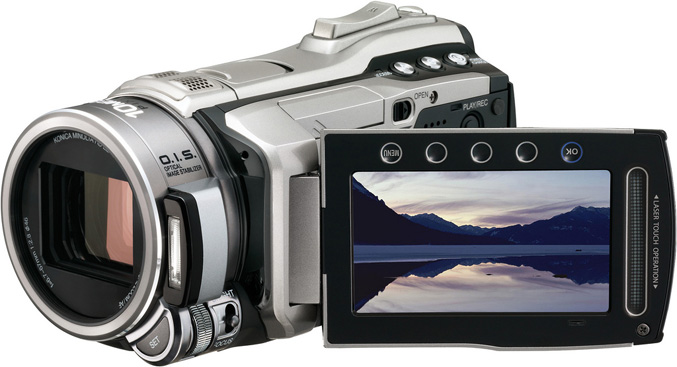 The GZ-HM1’s 1/2.3-inch 10.62 megapixel back-illuminated CMOS sensor dramatically increases sensitivity, enabling recording of high quality images even in low-light locations. Back-illumination technology moves the circuitry within the CMOS chip to a layer behind the photo diodes, avoiding loss of incoming light that occurs with conventional CMOS sensors. This efficient gathering of light increases the ability to obtain visual information, which translates into higher picture quality being available at the camera even in low light situations. The KONICA MINOLTA HD LENS is currently one of the world’s smallest and slimmest HD lenses, and offers 10x optical zoom.

A new optical image stabilization system with Advanced Image Stabilizer provides effective camera-shake compensation in a variety of situations. The camera’s optical image stabilization system uses two prisms within the lens housing to optically compensate for vertical and lateral camera shake. Together they are able to effectively reduce the effects of shake in any direction. This JVC system is enhanced by the company’s Advanced Image Stabilizer that improves compensation, especially in the wide angle range, providing a stable image even if the user is walking while shooting.

The camera’s 10.62 megapixel CMOS sensor allows the GZ-HM1 to shoot real 10 megapixel stills with ISO6400 sensitivity for pristine digital stills with high resolution, even if the lighting is less than ideal. The densely packed pixels of the CMOS sensor translate into smooth and realistic images without any sense of pixilation or gaps between pixels, for a look similar to film photography. ISO6400 high sensitivity is assurance that even in dark situations the image will look sharp and detailed. For further assistance in shooting in low light, the GZ-HM1 includes an automatic flash. 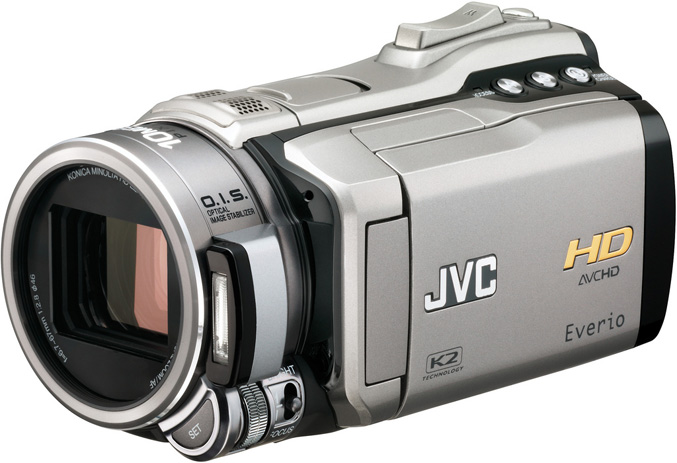 To meet the needs of the more demanding video enthusiast, the GZ-HM1 offers an array of manual controls. These include a manual adjustment dial that, among other functions, allows easy and precise manual focus. Other manual controls include selection of shutter or aperture priority shooting, and bracket shooting. In addition, there’s a user-programmable button for storing frequently used settings.

The GZ-HM1 also offers creative shooting functions, including time-lapse recording, available in all 2010 Everio cameras, to easily record in intervals ranging from one to 80 seconds. When played back, hours-long segments are reduced to mere seconds. Also available is high-speed recording at up to 600 frames per second, allowing ultra-slow motion playback for observation and analysis, such as a golf swing.

Digital files created with this new Everio camera can be easily shared in a variety of popular formats with the enhanced Everio MediaBrowser software for Windows®, which now provides automatic conversion of HD videos for immediate sharing on YouTube™ at HD or SD resolution. Files also can be directly exported to iTunes® and synced with an iPod® or iPhone®, or burned to DVD, all with just a few mouse clicks using the same Everio MediaBrowser application.