SanDisk Corporation and Sony Corporation today announced the joint development of two expanded formats that will shape the flash memory landscape for years to come. 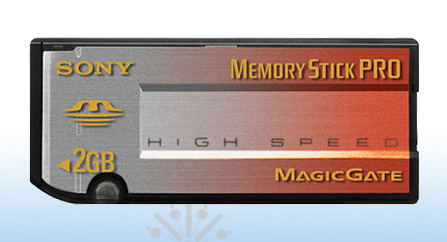 The demand for high-capacity memory cards capable of storing high-resolution pictures and videos is increasing as the image quality of high-definition digital still cameras, DSLR cameras, and camcorders continues to evolve. The new “Memory Stick Format for Extended High Capacity” format hopes to meet this demand by enabling the recording of up to 2TB of data, which is 60 times more storage capacity than the “Memory Stick PRO” format’s 32 gigabyte (GB)*3 capacity limit.
By this format expansion, “Memory Stick PRO Format for Extended High Capacity” shatters the terabyte mark for data storage, opening the door for wider applications. This new format is scheduled to continue to support the “MagicGate” copyright protection technology as well as the “Access Control Function”*4.

“SanDisk and Sony share a long collaborative history of developing products and technologies that enhance user experience and provide direct benefit to consumers,” said Yoram Cedar, executive vice president, OEM and corporate engineering, SanDisk. “Both companies have enjoyed great success with the Memory Stick PRO format in the past, and we are sure that the expansion of these formats to improve capacity and performance will be quite compelling. This technology provides a framework for us to develop products that will significantly impact mobile and consumer electronics markets.”

About SanDisk:
SanDisk Corporation, the inventor and world’s largest supplier of flash storage cards, is a global leader in flash memory – from research, manufacturing and product design to consumer branding and retail distribution. SanDisk’s product portfolio includes flash memory cards for mobile phones, digital cameras and camcorders; digital audio/video players; USB flash drives for consumers and the enterprise; embedded memory for mobile devices; and solid state drives for computers. SanDisk is a Silicon Valley-based S&P 500 company, with more than half its sales outside the United States.