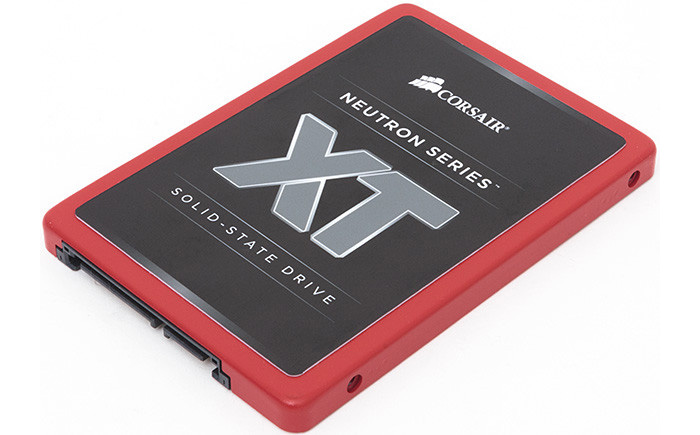 The popular memory and SSD maker Corsair has added a new SSD line to its product list. The new line has three models as of now with capacities of 240 GB, 480 GB and 960 GB and carries the Corsair Neutron XT brand name.

The Neutron XT packs all modern SSD technologies so you can rest assured that your money is well spent. Here’s what you get – a 2.5-inch SSD that is 7 mm thick and that sports the latest SATA 3.0 interface. The new SSDs are based on the Phison PS3110 quad-core controller and use 19 nm Toshiba A19 MLC NAND flash memory over an 8-channel interface. The PS3110 controller itself brings a number of useful features such as SmartFlush, which pushes inbound data to the flash, thus minimizing the chance of data loss in case of a power failure. The drives also support native 256-bit AES encryption and are TCG Opal 2.0 compliant.

Performance-wise the Neutron XT line is fast – the 240 GB model offers 564 MB/sec of read speed and 547 MB/sec of write speed. The 480 GB and 960 GB models share 562 MB/sec of read speed but offer various write speeds of 542 MB/sec (480 GB) and 532 MB/sec (960 GB). All three models are rated at 124 TB when it comes to write endurance. The drives also come with the latest version of Corsair’s SSD Toolbox software, which now comes with a refreshed user interface. The software allows you to manually optimize performance, update the firmware, tweak overprovisioning, monitor the SMART state of the device, clone, erase and more.

The pricing of the new models is unknown as of now.