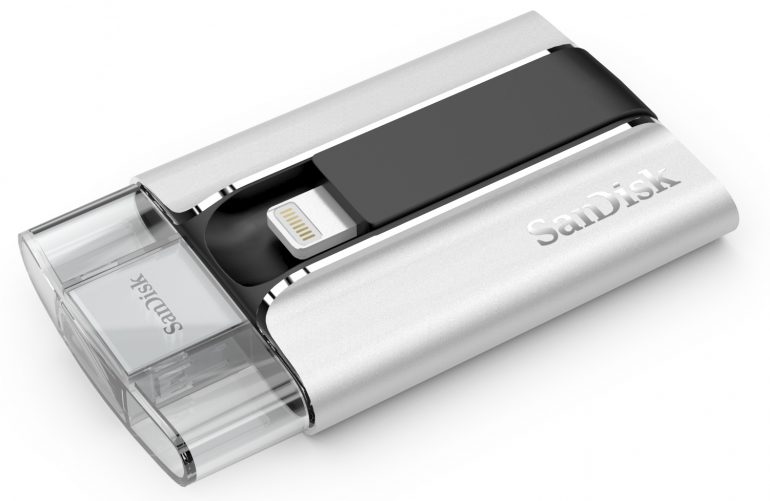 The main idea behind the iXpand is to allow users to easily and quickly transfer photos and videos from an iPhone or iPad to a Mac or PC – all without cables, access to the Internet or bandwidth limitations. In addition the flash drive maintains the original photo or video resolution quality.

“According to IDC, nearly three-quarters of all images are now captured on smartphones and tablets,” said Dinesh Bahal, vice president, product marketing, SanDisk. “With this significant increase in mobile-generated content, consumers are looking for easy ways to manage it all. In fact, our research shows that 82% of U.S. smartphone users find transferring photos, videos, music and other files to be very important to them. We created the iXpand Flash Drive to offer consumers a quick and safe way to move their favorite content between devices so it’s available when and where they want it.”

The flash drive offers a unique flexible connector so that it can directly connect to an iPhone or iPad without first removing the protective case. The drive also features a premium metal exterior which adds to its durability. The drive depends on an iXpand app that launches once you insert the drive into an iPhone or iPad and can be configured to automatically sync photos and videos from the camera roll to the drive. In addition, users can store their favorite movies on the iXpand Flash Drive and instantly play them directly from the drive on their iPhone or iPad. Most popular movie formats, including non-native and PC-friendly ones, like AVI & WMV, are supported — saving time, effort and complexity of converting video formats. The iXpand sync app also enables cross-platform encryption, offering consumers the ability to transfer and access their sensitive files from iPhone, iPad, PC and Mac computers. Using the iXpand sync app, files can be password-protected on the drive directly from an iPhone or iPad and then easily decrypted on a Mac or PC and vice versa.

The new SanDisk iXpand flash drive is available in capacities of 16 GB, 32 GB and 64 GB and comes with a 2-year limited warranty. No word on pricing. As to the iXpand app – it is available on the App Store for iPhone and iPad.