During the BlizzCon opening ceremony, the highly anticipated fourth playable class for Diablo III, the monk, was announced. A panel was held soon after to go into the details of the monk, updates to the other previously known classes, and how the enemies they fight are designed.

The panel began by showcasing the monk as a fast but fragile melee fighter, providing a contrast to the barbarian’s slower but harder-hitting melee presence in the game. The monk’s influences draw from classic pen and paper RPG archetypes, but his style also incorporates the development team’s love of arcade-style fighting games. The monk combo system uses many of these fighting game influences, allowing special combo skills to be mixed and matched together to gain the best results from each skill. 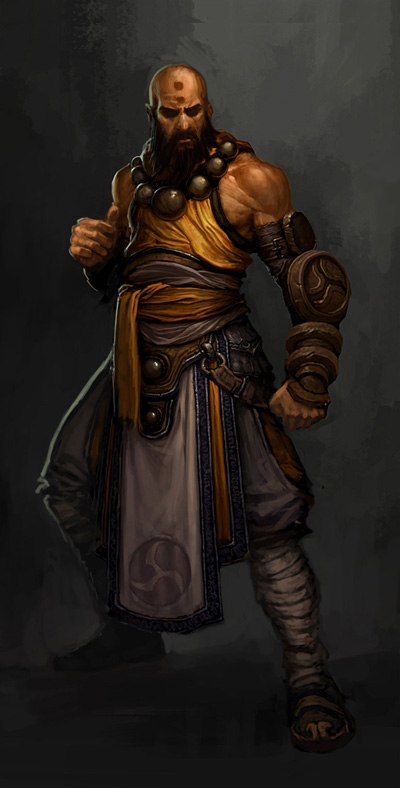 While many of the monk’s influences are from traditional light and fast melee, he is indeed a holy warrior. His use of holy magic flows through each of his skills, combining martial arts with divine justice. It’s a class that prefers speed over toughness, but that doesn’t mean he’s incapable of handling the hordes of enemies that he’ll be fighting. The skills and use of the combo system makes the monk a character that will be a bit more challenging to play than the other heroes in the game, but when played expertly can unleash truly devastating damage upon the demonic hordes facing him.

The combo system that encompasses many of the monk skills is what truly sets this class apart. Monk skills that use the combo system can be chained together in different orders to achieve different results. This was demonstrated at the event by covering the monk skills Way of the Hundred Fists, Crippling Wave, and Exploding Palm. Each skill has three steps which are used in order each time the skill is used. For instance, the first hit of Exploding Palm will deal some damage, the second hit will deal a little more, and the third hit will apply a bleed ‘damage over time’ (DoT) on the enemy. This particular DoT has the unfortunate effect (for the enemy) of causing more damage if they move, and causing them to explode and cause damage to all enemies around them if they die while it is still applied. 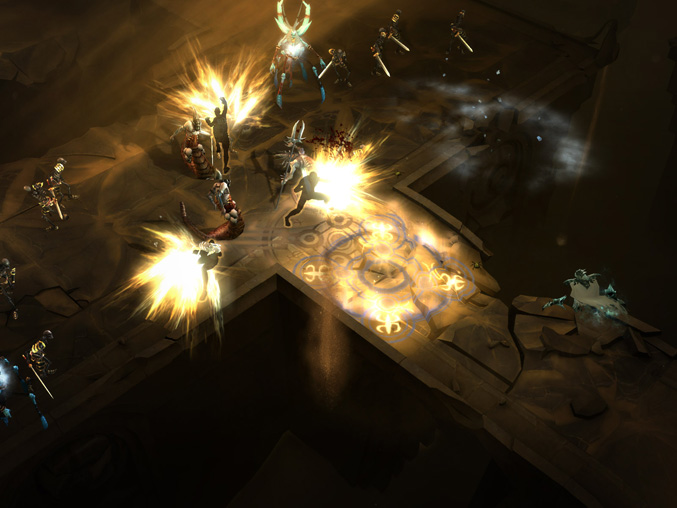 If you were to use the first two steps of a different combo ability you could then use Exploding Palm and immediately be using the third step, which is the devastating DoT. Each combo skill can be used in this way, mixing and matching which step of the combo from each skill you want to use. Knowing each step of the skills, moving between them and using them appropriately in each situation will be a testament to the skill of the player. These quick hits with sequential variety also add a very iconic martial arts flavor to the class in addition to their tactical skill requirement. 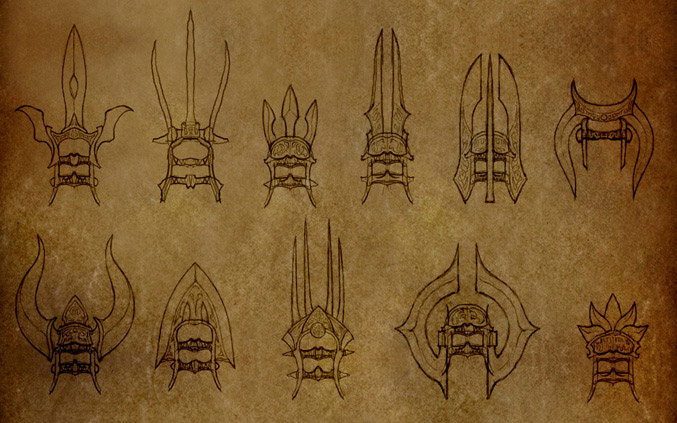 The feature many players were excited about from its showing at last year’s BlizzCon was curiously disabled in the playable build at BlizzCon, but the team was quick to explain why the rune system isn’t making an appearance. He began by explaining that skill runes still represent a core piece of the customization options in Diablo III, and that they aren’t being removed, just temporarily disabled.

He then went into the process of how runes make it into the game, and how the design flow works against the ability to implement a lot of runes at this point in development. If any number of variables contributing to a rune change, not the least of which is the design of the skill the rune alters, the rune and its function essentially has to be completely restarted from scratch. As players are able to see in this year’s playable demo of Diablo III, many of the skills have changed, many added, and some even removed or replaced. Creating runes while the skills are still in this state of constant and heavy revision would mean a lot of wasted effort on the part of the development team.

The panel then shifted gears and held up to its namesake by moving to the design and implementation of the enemies that inhabit Sanctuary. The section kicked off with the overall design philosophy for creating monsters in Diablo III. The points made were that monsters work best in Diablo when kept simple, that their complexity shows best when it comes from combining different monster types in groups, that being able to identify monsters easily is key, and that the game should keep introducing new monsters to the player. 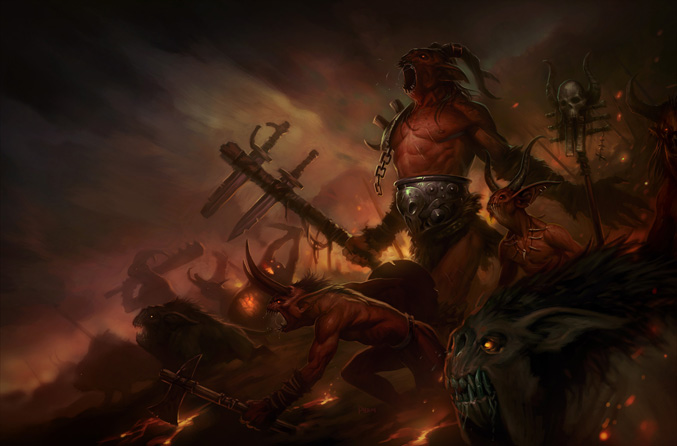 The panel then went into the monster creation process, starting with the first step — pitching the idea. This could come from any area of the team, but generally starts from one of three places: a visual concept from the artists, an environmental concept from the world designers, or a behavioral concept from the game designers. The second step is putting it down on paper and fleshing the monster out. What is it going to do, what are all of its attacks, what is its visual style and theme, is it large or small, and at least one piece of concept art. The third step takes it from paper to actually crafting the creature. The modelers create and texture the monster, the technical art team does a first pass on its visual and attack effects, and the animators take their first shot at bringing the monster to life. It then moves into an implementation phase of bringing it into the game world with things like health and damage stats, immunities and resistances, movement speed, and its basic attacks and powers. Then it’s actually seen in-game for the first time. After reviewing how it acts and reacts, and how the design and art goals have been reached, it goes through further refinements of each step.

After creating texture variants, rare/champion variants, fine tuning its abilities and interactions, and finalizing the art, the monster is now a full addition to the world of Sanctuary.

The next stage of the panel showcased specific foes. The process began with two new enemies seen for the first time in the BlizzCon demo, the snakeman and sandwasp, then moved on to everyone’s Diablo family favorite, the fallen. Three varieties of fallen were shown — the rank-and-file fodder imp, the resurrection-happy shaman, and the crazy-cousin lunatic. 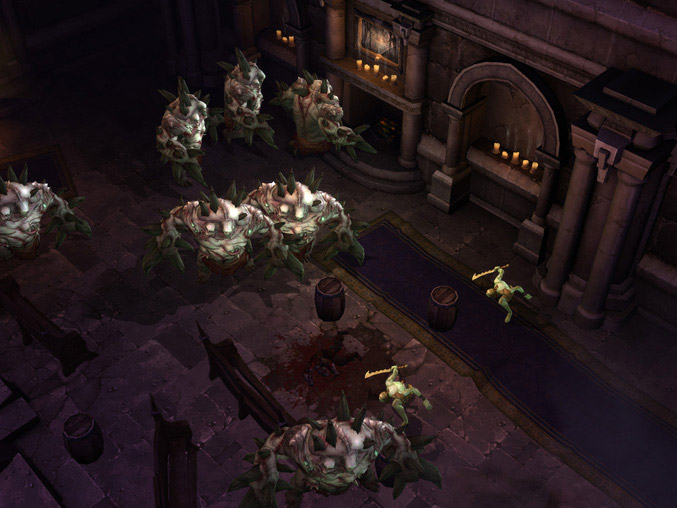 While the panelists talked about how these monsters interact with the world around them, and even their relationships with one another as they work against our heroes, they moved on to an interesting topic of how design can sometimes end up very differently than originally planned. The dune thresher, originally announced in September of 2008 on the official Diablo website, served as their example. The original design of the monster had a key goal in mind: getting across the idea that “the sand isn’t safe.” It was originally inspired by the movie Tremors, and that connection definitely brings across the idea that the soft sandy areas are vulnerable to attack from below. Other goals of the thresher were to have it able to submerge freely and require the player to make it vulnerable to attack by luring it onto some of the rocky outcroppings in the area. This would encourage tactical fighting by using the environment as a way to make the enemy vulnerable. 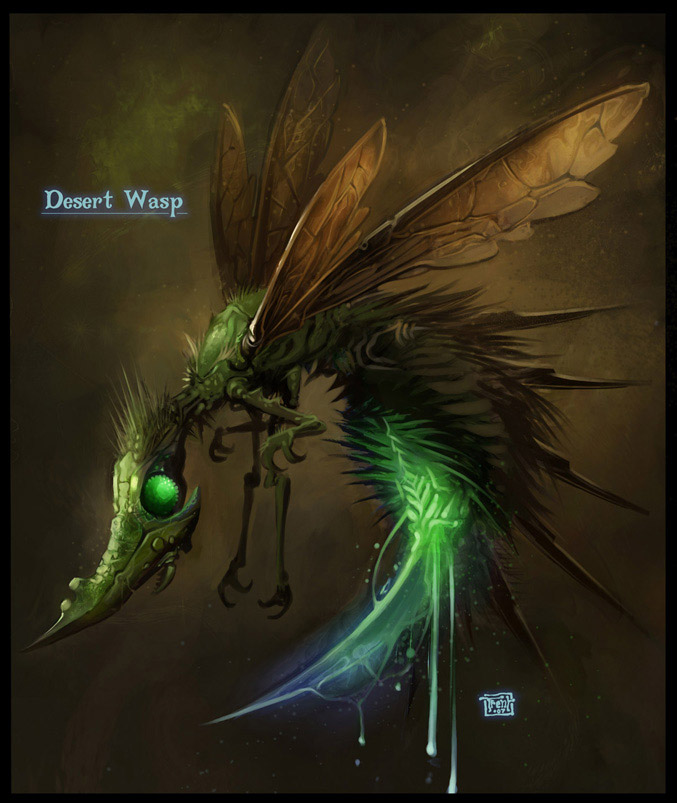 Instead the results were that the player was confused, they didn’t notice when the thresher was attacking while submerged, and ultimately they would simply ignore the dune threshers to instead blow up the many easily noticeable fallen and cultists in the area.

So to fix these issues they went over some of the solutions they’ve used so far. They made the thresher harder to escape, increased its speed while submerged in the sand, discarded the sand/rock mechanic and instead had the creature submerge when distant from the player, and finally removed the ability to attack while submerged. While they explained that these changes have helped remove a lot of the confusion, they still haven’t quite reached their original intent, which is to make the player feel frightened to be walking on the open sand, so there’s still more work to do. The development of a monster doesn’t always work out the first time, but the team will keep at it until it’s right.

The panel then closed, before going to crowd Q&A, by showing some of the mistakes and accidents that sometimes happen during game development. They showed a series of videos of effects, programming, and art errors. The crowd favorite was certainly the “burrower” (briefly seen in the Worldwide Invitational announcement videos) that had its texture accidentally replaced with Deckard Cain’s — creating a thin, rodent-like version of the Horadric mage, digging and burrowing in the ground.