SkyCross, a global antenna designer and manufacturer, today announced that it has expanded personal connectivity and improved end-user satisfaction by enabling Wi-Fi and Bluetooth to operate simultaneously in netbooks. Because 802.11 b/g/n and Bluetooth operate at 2.4 GHz, interference between the two RF signals previously made using both functions at the same time nearly impossible, particularly when the two antennas were in close proximity inside a device.

Today’s chipsets and Wi-Fi/Bluetooth combo Mini-Cards are capable of supporting both operations simultaneously, so the antenna has been the industry’s roadblock. Now, iMAT® from SkyCross is the industry’s first single-antenna solution that offers greater than 35 dB of isolation between Wi-Fi and Bluetooth to enable coexistence even in compact devices such as netbooks. Netbook shipments are expected to double in 2009, going from 16.4 million to nearly 33 million units. Many netbooks shipping today are equipped with Bluetooth, so the coexistence challenge is particularly prominent in this growing segment. 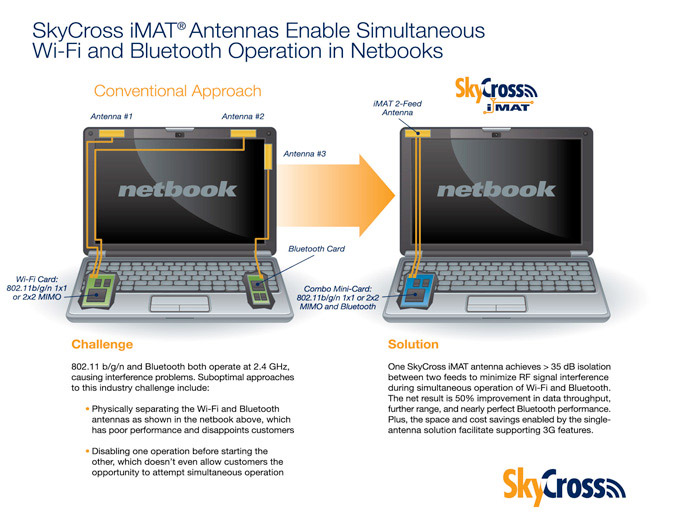 Some designers attempt to solve the problem by separating the Wi-Fi and Bluetooth antennas in hopes that the physical space will provide enough electrical isolation for them to both operate simultaneously. This approach delivers poor performance, particularly in small devices such as netbooks, and customers are often disappointed as a result. Other netbook designers avoid the Wi-Fi and Bluetooth coexistence challenge altogether by disabling one operation before the other can start. This approach doesn’t allow customers to use a wireless headset while making a Skype call, listen to wireless stereo speakers while streaming audio, or even use a wireless mouse or transfer pictures from one device to another while online. Prior to the iMAT solution from SkyCross, these suboptimal conventional antenna approaches to an important industry-wide challenge put the end-user satisfaction in this market segment at risk, resulting in increased customer support calls, along with netbook and Bluetooth accessory product returns.

Today, SkyCross uniquely solves the Wi-Fi and Bluetooth coexistence challenge with its award-winning iMAT technology. iMAT is a design technique enabling a single antenna element with multiple feed points to behave like multiple antennas, each with very high isolation. iMAT has multiple benefits: it can consolidate the number of antennas required in a device, reduce the specific absorption rate (SAR), eliminate RF components, and more. In this instance, iMAT enables a single antenna to have one feed dedicated to Wi-Fi and another feed shared with Bluetooth, which uses the chipset providers’ time-sharing and adaptive frequency hopping algorithms. The very high, built-in isolation between the two feeds enables both to operate at the same time in a very small space. In addition, the iMAT single-antenna solution reduces the number of conventional antennas by a factor of three, which reduces antenna space and system cost in netbooks to facilitate supporting 3G features.

“Chip makers are very encouraged by this breakthrough, and manufacturers are already planning to use the SkyCross iMAT solution in their future products,” said Joe Gifford, Vice President of SkyCross. “Our antennas differentiate netbook brands by maximizing their connectivity range and enabling optimal simultaneous functionality at an equivalent price, which pleases consumers. Seamless Wi-Fi and Bluetooth coexistence opens the door for new applications and a user experience that will propel netbook brand loyalty.”

Intel to launch more Broadwell models after all