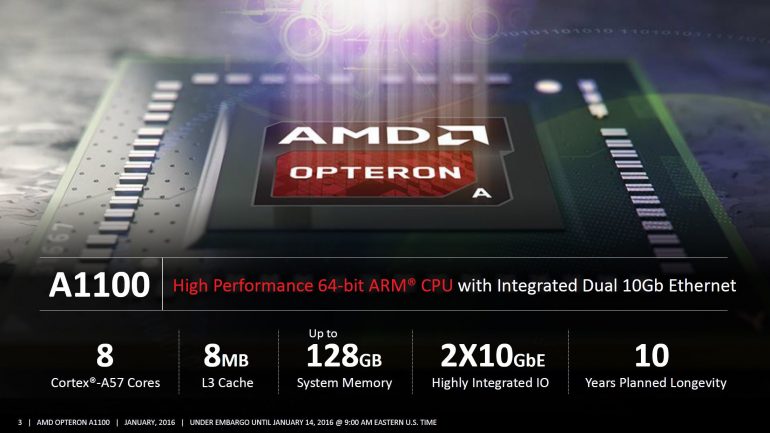 AMD has made a major announcement – the company has presented the new Opteron A1100 line of 64-bit ARM processors, designed for use in datacenters. The new chips were known as “Seattle” until now.

“The ecosystem for ARM in the data center is approaching an inflection point and the addition of AMD’s high-performance processor is another strong step forward for customers looking for a data center-class ARM solution,” said Scott Aylor, corporate vice president and general manager, Enterprise Solutions, AMD. “The macro trend of convergence between networking, storage and servers is an important catalyst in this evolution. Customers now have access to 64-bit ARM processors from the only silicon provider that also has decades of experience delivering professional enterprise and embedded products.” 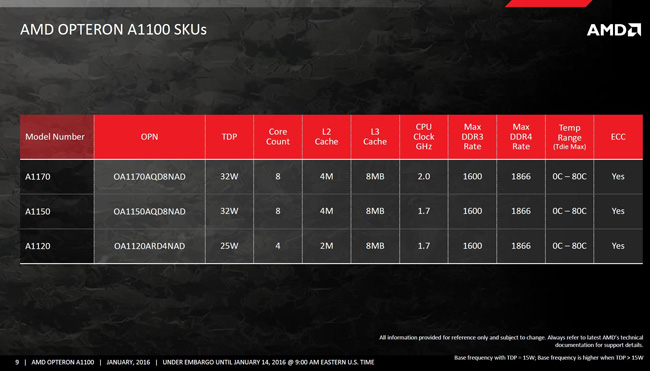 The new AMD Opteron A1100 line of ARM chips offers up to eight Cortex-A57 cores with 4 MB of shared L2 cache and 8 MB of shared L3 cache, two 64-bit DDR3/DDR4 memory channels for up to 1866 MHz ECC memory, two 10 Gb Ethernet network ports, an 8-lane PCI-Express Gen 3 connector and fourteen SATA 3.0 ports. In addition to this the chips in the line come with full support for various Linux versions.

“Red Hat and AMD share a vision of building an open, standards-based software ecosystem for highly converged designs based on 64-bit ARM architecture. As one of the first participants in Red Hat’s ARM Partner Early Access Program, AMD has been instrumental in the testing and porting of the world’s leading enterprise Linux platform to 64-bit ARM architecture”, said Ranga Rangachari, vice president and general manager, Storage, Red Hat. “The arrival of the AMD Opteron A1100 SoC represents a major milestone to the ecosystem interested in driving converged infrastructure for storage, networking, and compute.”

AMD has started the mass production of the new Opteron A1100 chip line so in a few weeks time you will be able to find one such chip, given that you need it.