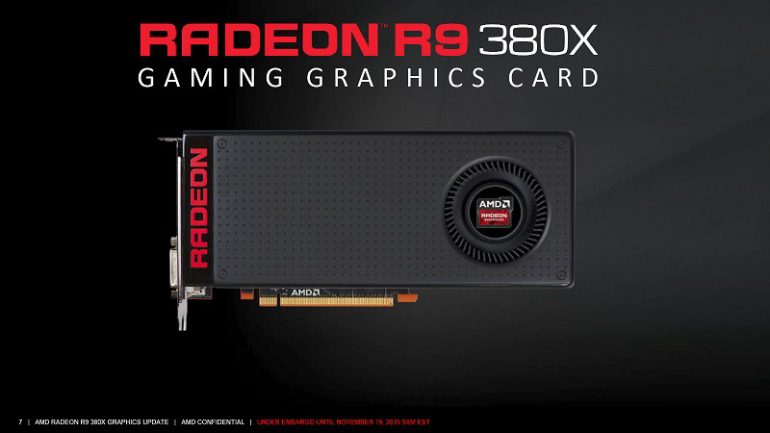 As expected earlier, today AMD has unveiled the rumored Radeon R9 380X graphics card. The new card has turned out to be everything that we expected down to the last detail so we can easily say we know all the tech specs. For all the people who are late to the party, however, we will describe the tech specs of the new graphics wonder once again.

So the Radeon R9 380X comes with AMD’s Antigua XT GPU, which is an enhanced version of the Antigua GPU, also known as Tonga. The thing here is that Antigua/Tonga came with some stream processors disabled but this is no longer the case with Antigua XT, hence the name. So users of the Radeon R9 380X now have the chance to experience the full power of Antigua/Tonga. Thus the GPU inside the R9 380X comes with 32 Graphics Core Next (GCN) units, which total 2048 stream processors, 128 TMUs and 32 ROPs. The GPU runs at 970 MHz (1000 MHz Turbo), while the 4 GB of GDDR5 memory that reside on the card work at 5700 MHz effective and get serviced by a 256-bit memory bus, which results in 182 GB/sec of memory bandwidth. The card needs two 6-pin power connectors as well so those of you with weak PSUs may have to get a new power supply unit before upgrading.

The R9 380X definitely looks good but AMD makes the deal even sweeter by striking NVIDIA where it hurts the most. First tests indicate that the R9 380X performs better than the GeForce GTX 960 but a bit slower than the GTX 970 so the new card occupies a market spot where NVIDIA has nothing to respond with. In addition analysts expected the R9 380X to cost USD 250 and up but AMD now sells the card for just USD 229, making the R9 380X a tempting purchase.

The new card is now on the market so go get it if you have the need and the cash!