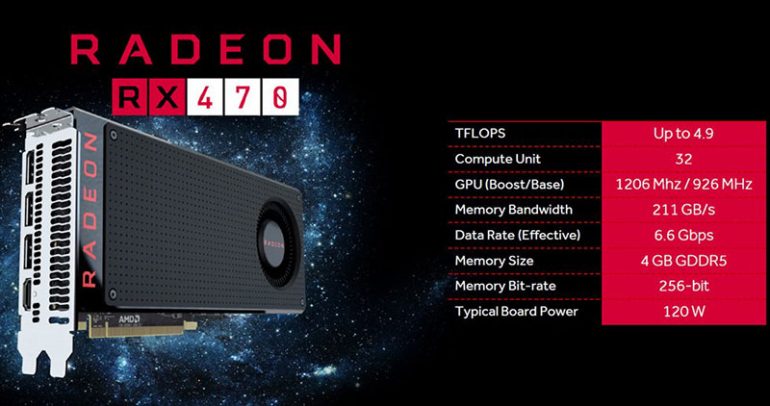 The new card comes with no last minute tech changes and this means it is based on Polaris 11 technology. The GPU inside offers 2048 stream processors that work at 926 MHz (1206 MHz in Turbo mode), 32 ROPs and 128 texture units. The card has 4 GB of GDDR5 memory at 6600 MHz and a 256-bit memory bus. This means that the Polaris GPU gets 211 GB/sec of memory bandwidth. Thus RX 470 offers 4.9 TFLOPs of computational power. The reference card comes with an additional 6-pin power connector and consumes around 120W of power. At the back the RX 470 has three DisplayPort 1.4 outputs and a single HDMI 2.0 port.

The price of the new card is around USD 180, depending on the manufacturer. According to AMD the Radeon RX 470 is the perfect card for DirectX 12 gaming at Full HD resolution.