AMD to update all its graphics cards this year 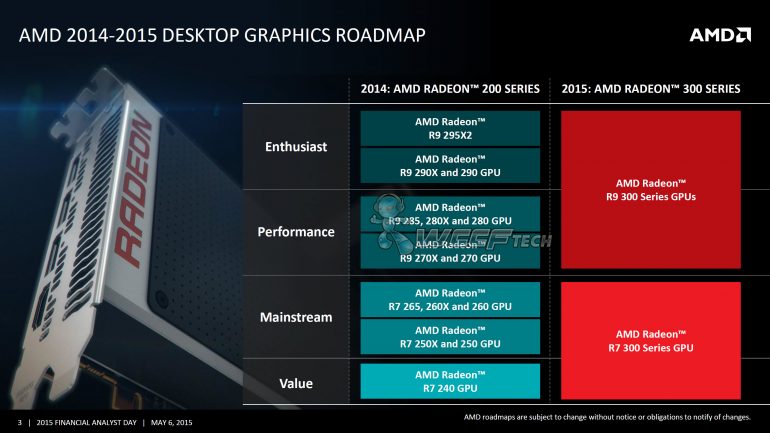 AMD keeps on making news these days – after having its Investor Day a few days ago yesterday the US company had its Financial Analyst Day during which it focused on its graphics cards. We all know that the Radeon R9 390X with HBM memory is on the way but this will not be the only Fiji card to come – instead AMD plans to update all AMD graphics card lines this year.

Unfortunately for some people several Radeon R9 or R7 300-series cards will feature older GPUs so not all new models will be based on AMD’s latest Fiji technology. As before the new Radeon R9 300 line will serve gamers and hardware enthusiasts by offering Fiji, Hawaii and Tonga chips and the new Radeon R7 300 line will cover the mainstream and budget market segments. AMD also said a few words on the upcoming Radeon 400 line – it will arrive in 2016 and will feature second generation HBM memory, a 14 nm FinFET production process, two times better power efficiency and the latest GCN optimizations. In addition the upcoming Radeon 400 line will likely feature new chips everywhere unlike the Radeon 300 line.

The Radeon R9 390X, which will be the world’s first video card with HBM memory, will arrive next month at Computex 2015.