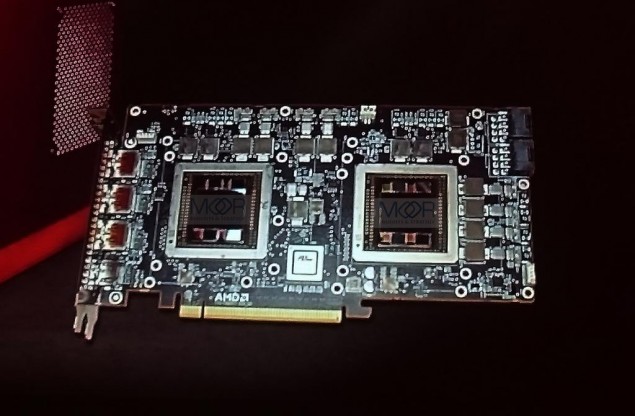 After the triumphant launch of the Radeon R9 Fury X and Radeon R9 Nano AMD will soon launch a new 3D monster that will come with no less than two separate Fiji XT graphics chips. After “Fury X” and “Nano” this time the card may be called “Gemini” to emphasize the two GPUs that sit in there.

This information has been leaked by Zauba, which is a pretty reliable source of information. Apparently the card is in its last stage of development and it has even been shipped to select reviewers for reviews.

The card will have two Fiji XT GPUs, which will bring the total number of stream processors to 8192. There will also be 128 GCN compute units, 128 render output units and 512 texture mapping units as well as 8 GB of HBM memory (4 GB per chip). The Radeon R9 Gemini will run its HBM memory at 500 MHz and thanks to the dual 4096-bit memory bus the card will provide 1024 GB of memory bandwidth. There will also be liquid cooling and the same Cooler Master heat sink seen in the Radeon R9 Fury X. You will need a powerful PSU and a deep pocket to enjoy this marvel – the Gemini requires two 8-pin power connectors and the expected price is around USD 1000.

The Radeon R9 Gemini will provide 17.2 TFLOPS of performance, making it one of the world’s most powerful video cards. It will make 4K gaming at 60 FPS reality and when combined with Oculus Rift gamers will also experience smooth gameplay no matter the settings. Oh, this is really exciting!

There’s no word on the launch date as of now and the GPU frequency is still unknown but this is a story in progress so we will have more details a bit later.