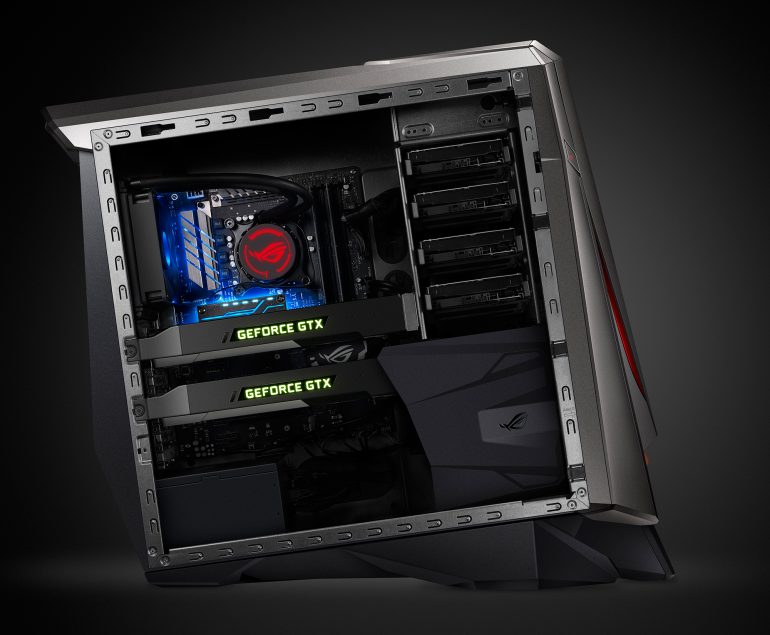 ASUS has pleased its gamer fans with the release of a new ROG gaming PC, which is called ROG GT51CA. The new computer is unusual in several ways – it comes housed in an unusual chassis and in addition to this it is a 3D graphics monster as well.

The new ROG GT51CA computer is available in various configurations. You can choose if you want an Intel Core i7-6700K processor or the slowest Core i5-6600K. Next to them, the computer features up to two GeForce GTX Titan X video cards, but you can also install a GeForce GTX 970, GTX 980 and even a pair of GTX 980 cards. The ROG GT51CA features a special key, that when pressed, automatically overclocks the installed processor. Thus you can expect to have your Core i5-6600K overclocked to 4.3 GHz, while the Core i7-6700K may run at up to 4.6 GHz.

The ROG GT51CA can take up to 64 GB of DDR4 memory and has enough space for hard drives with capacities of up to 3 TB. The computer also supports up to two M.2 SSDs with the PCIe interface and capacities of up to 512 GB each or a single M.2 SSD with a capacity of 256 GB and a SATA interface. There’s also space for up to five 3.5-inch or 2.5-inch storage drives.

The ROG GT51CA comes with numerous connectivity options such as eight USB 3.0 ports, two USB 2.0 ports, two USB 3.1 ports (one of which is Type C), a PS/2 connector and a Gigabit Ethernet chip. The computer measures 262 x 584 x 587 mm and weighs 27 kilograms (with two GTX Titan X cards installed. Along with it, users will also get a ROG Band bracelet. Thanks to the usage of NFC technology the ROG Band can give access to Shadow Drive, which is a place, where users can keep sensitive information. The bracelet can also be used for overclocking purposes.

There’s no information how much the new ROG GT51CA by ASUS costs.