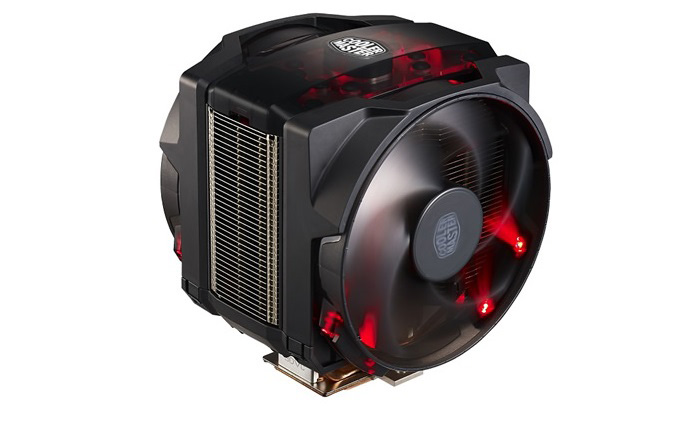 The MasterAir Maker 8 comes with the so called Cooler Master 3D Vapor Chamber, which includes four heat pipes. The cooler is based on phase-change technology in which a cooling agent evaporates and then emits the heat it carries in the 3D Vapor Chamber where it turns into a liquid again. According to Cooler Master the implementation of this technology has increased the efficiency of the MasterAir Maker 8 by 19 per cent. In addition to this the new CPU cooler by Cooler Master comes with four 6 mm heat pipes that go around a huge heat sink. The MasterAir Maker 8 is equipped with two 140 mm Silencio FP cooling fans that spin at 600-1800 rpm and that push up to 66 CFM of air at noise levels of 24 dB at most. The Silencio FP cooling fans boast a life span of 160 000 hours so you will use your MasterAir Maker 8 CPU cooler for a really long time. Moreover the fans come with integrated red LEDs.