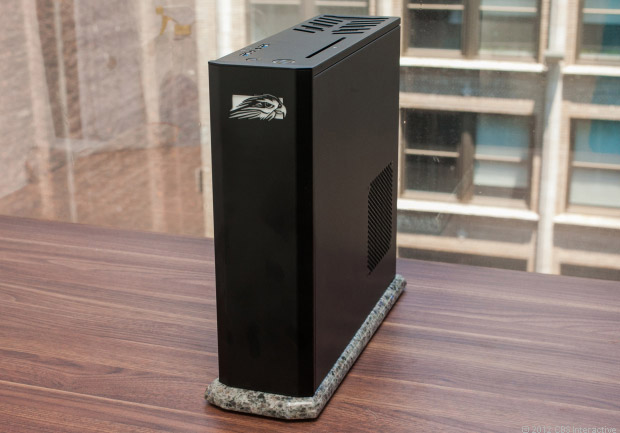 Besides the powerful hardware the most striking feature of the new gaming PC is its small size. About as big as an Xbox 360 gaming console the Tiki measures just 4 inches wide and 13 inches tall. Being so small the biggest problem of the PC is to not get knocked down by a stray elbow or your pet so Falcon Northwest has come up with a really ingenious way of keeping the case up and running – the bottom of the Tiki is built into a piece of granite making the Tiki the first PC to ship with a 6-pound piece of solid polished granite that adds even more style to the small and thin PC case.

“For Falcon’s 20th anniversary, we wanted to create a PC unlike anything the world had ever seen.  We wanted it to be a showcase of the recent breakthroughs in speed and power efficiency the latest CPUs and graphics cards have made. We wanted to destroy the notion that powerful PCs had to be giant, hulking towers.  We wanted to reduce the size of the system to its absolute minimum, while still handling the fastest desktop components”, the company said while revealing the Tiki.

Truly, Falcon has provided some of the fastest PC hardware on the planet right now. The Tiki includes a slot loading disc drive, a 450-watt PSU, an Intel Core i7 Ivy Bridge processor, an NVIDIA GeForce 600-series video card, up to 16 GB of DDR3 memory and more.

The Falcon Northwest Tiki gaming PC is available now but shipping is expected to start in July. All systems will be custom built according to the customer’s desires and depending on options will cost between 1900 USD for the most basic configuration and 5000 USD for the fully loaded custom painted builds.