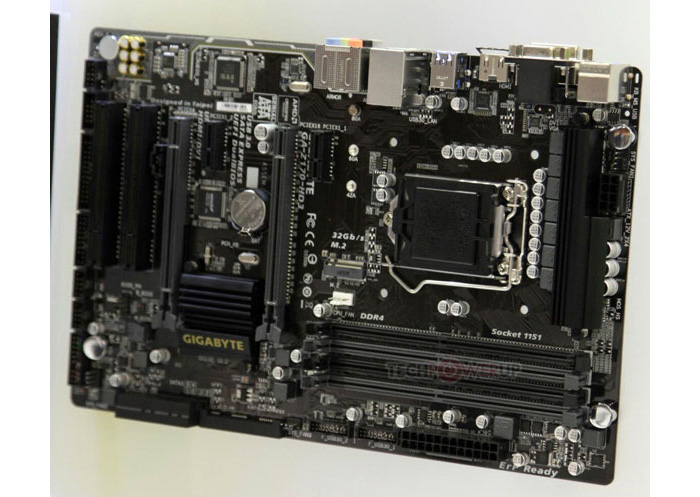 Intel’s upcoming Skylake processors will require a new LGA 1151 socket much to the disappointment of current Haswell/LGA 1150 users and since the Skylake generation is on the horizon we expect to see the first LGA 1151 boards just around this time.

In fact the first LGA 1151 motherboards have started appearing with Gigabyte being the first company to present a budget-oriented LGA 1151 motherboard. The new company product is called Z170-HD3 and as the name suggests the board uses the latest Intel Z170 chipset. Despite being a budget board the Gigabyte Z170-HD3 packs a punch – the board supports all upcoming Skylake processors and offers a 24-pin power connector and an 8-pin EPS power connector. In addition there are four DDR4 memory slots, one PCI-E 3.0 x16 slot, one PCI-E 2.0 x16 slot (electrically 4x capable), two PCI-E 2.0 x1 slots and two PCI slots. The board has a single M.2 slot, two SATA-Express (16 Gbit/s) ports and six SATA 3.0 ports. In the back there are six USB 3.0 ports, one D-Sub port, one Dual-Link DVI port and one HDMI 2.0 port as well as a Gigabit Ethernet jack. Finally the board has an 8-channeled HD audio sound card and high-quality components.

The release date and the price of the Gigabyte Z170-HD3 are unknown as of now.