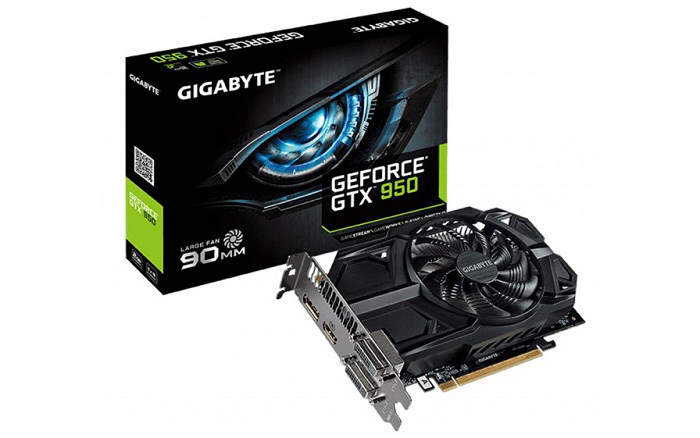 Gigabyte has become the latest and perhaps not the last company to release an energy-efficient GeForce GTX 950 video card that does not need extra power via a 6-pin power connector. The card is called GeForce GTX 950 OC (GV-N950D5-2GD) and as you can see it comes factory overclocked. Moreover thanks to the lower power requirements the GV-N950D5-2GD can work in PCs, which have PSUs with up to 350W of power output.

The new Gigabyte video card is based on the NVIDIA GM206-250 GPU, which includes 768 CUDA cores, 48 texture units and 32 ROPs. The chip can work in two modes – Gaming (1026 MHz/1190 MHz Turbo) and OC (1051 MHz/1228 MHz Turbo). The card has 2 GB of GDDR5 memory that runs at 6610 MHz and transfers data over a 128-bit memory bus. A feature worth noting is that the GV-N950D5-2GD comes with a special cooling system that has been designed especially for this card. The cooler comes with a 90 mm low noise fan and a compact aluminum radiator. In addition the card includes high-quality Ultra Durable 2 components and comes with improved durability. In the back the GV-N950D5-2GD sports one DVI-I, one DVI-D, one HDMI and one DisplayPort connectors. The card is 181 mm long.

It is unclear as of now when the GV-N950D5-2GD will be in stores and how much it will cost.