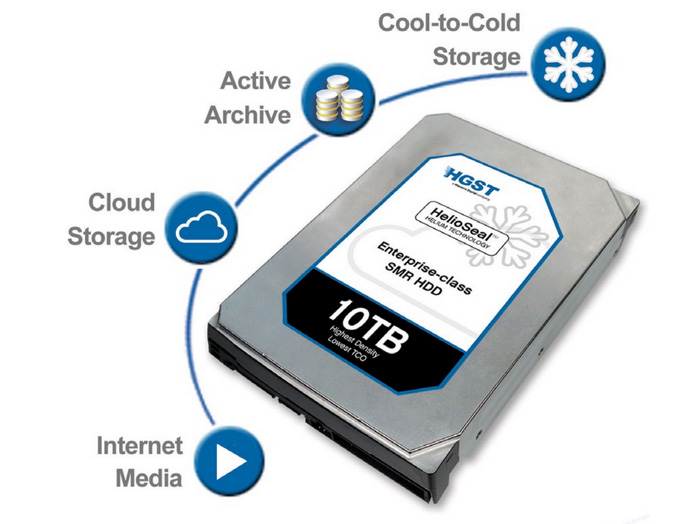 HGST, which is now a part of Western Digital, has announced the world’s most spacious hard drive that comes with a capacity of 10 TB, thus stealing the title from Seagate just days since the US company launched an 8 TB drive.

The new drive comes in the common 3.5-inch form factor and features five 2 TB platters that spin at 7200 rpm. A peculiarity of the drive is that it is full of helium and features the so-called Shingled Magnetic Recording (SMR) technology that increases platter capacity by using partially overlapped tracks. The trade-off is that SMR drives feature a slower write speed but the read access speed is the same. HGST says the new drive has the industry’s lowest $/TB and watt/TB ratings, and its technology will be “the foundation for all future scaling technologies, putting HGST on an accelerated path to delivering high capacities into existing and future form factor designs.” As of now the drive does not have a name.

Apart from the new 10 TB drive HGST also announced a number of other products such as the 6 TB air-filler Ultrastar 7K6000 hard drive. The device uses perpendicular magnetic recording technology and spins at 7200 rpm. The second generation of the HGST Helium now comes with 8 TB under the hood and HGST says its use reduces the physical and carbon footprint of the overall storage systems using it, as it needs less power, cooling and space than lower capacity air-filled drives. Compared to the 6 TB version of the helium-filled drive, it delivers 33 per cent more capacity and needs 23 per cent less power.