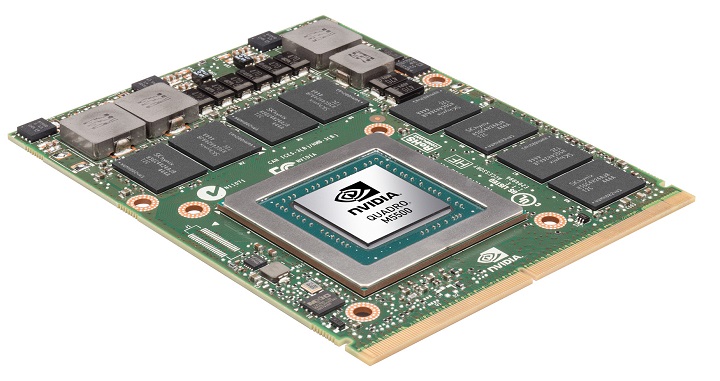 NVIDIA has enhanced its portfolio of mobile professional video cards with the addition of the new Quadro M5500 model. A few months ago the US company announced the Quadro M6000, which currently acts as NVIDIA’s flagship. Well, the role of the Quadro M5500 will be to serve people with lower video card requirements. Even then, though, the Quadro M5500 will have enough power to offer virtual reality (VR) capabilities in a notebook package.

The new Quadro M5500 is based on the 28 nm GM204 GPU, which includes 2048 stream processors, 128 texture units, 64 ROPs and a 256-bit memory bus. The card has 8 GB of GDDR5 memory that runs at 6600 MHz, providing 211 GB/sec of memory bandwidth. This allows the Quadro M5500 to reach 4.46 TFLOPs of single-precision power, which makes it the most powerful NVIDIA video card, ever installed in notebooks. Unfortunately with performance comes a price to pay and we do not mean cash – the Quadro M5500 has a TDP level of 150 watts, which makes it one hot video card.

The market presence of the Quadro M5500 will occur in May of this year with the first notebooks based on the new NVIDIA product appearing this summer.