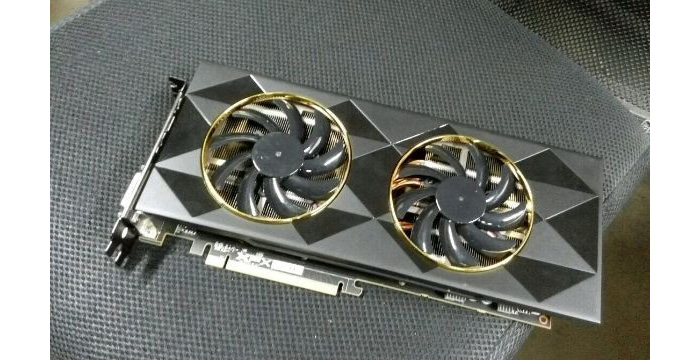 One of the things that we know that will happen for sure this year is the release of AMD’s third generation Radeon graphics cards. As usual the top models will be the most exciting ones since they will come with HBM memory, advanced cooling solutions and tons of new features. The new models are expected sometime this summer and while we know most of the tech specs we haven’t seen pictures of the upcoming R9 300 generation.

This might change now. The first pictures of what seems to be a Radeon R9 390 graphics card, made by XFX, have been published online. They show a card with a tall, dual-slot cooling solution with two 100 mm cooling fans and a large aluminum fin-stack heatsink. In addition there are two PCIe power connections – the first one has 6 pins, while the second one has 8 pins. Finally there’s XDMA CrossFire and HDMI, DVI and other ports.

The Radeon R9 390 will be a model that sits below the Radeon R9 390X flagship model but unfortunately its tech specs are unknown as of now. The card is expected to have at least 3072 stream processors, between 4 GB and 8 GB of on-board memory (will we see HBM memory here?) and a sophisticated cooler on top of all this hardware. The card will compete with NVIDIA’s GeForce GTX Titan X and is expected to appear this year for a price of around USD 500.