TUL Corporation, also known as PowerColor, has launched the new Devil13 Dual Core Radeon R9 390 video card that packs two AMD Grenada cores. The new video card has been designed to rip through the latest games and is ready for all gaming titles that are yet to come. Apart from two GPUs, the PowerColor Devil13 Dual Core Radeon R9 390 has 16 GB of GDDR5 memory that runs at 1350 MHz over a 1024-bit memory bus (2 x 512-bit), while the two GPU cores operate at 1000 MHz. 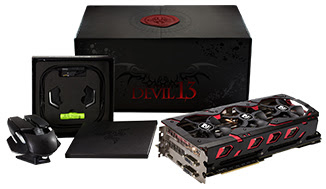 The new Devil13 Dual Core Radeon R9 390 video card includes only high-quality components and an ultra-efficient thermal design. The card has massive 15-phase power delivery, PowerIRstage, Super Cap and Ferrite Core Choke for excellent stability and reliability and three Double Blade fans that will have to take care of the heat emitted. The fans are attached to an enormous aluminum heat sink that has a total of 10 heat pipes and 2 pieces of large die-cast panels. In addition the PowerColor Devil13 Dual Core Radeon R9 390 has LED backlighting that glows in a bright red color and shows a pulsating Devil 13 logo. The card requires a lot of power and that’s why it comes with four 8-pin power connectors and Dual BIOS in case you encounter problems while overclocking the video card. Furthermore PowerColor honors the owners of the Devil13 Dual Core Radeon R9 390 by including the high-end Razer Ouroboros gaming mouse inside the package. The video card supports AMD LiquidVR, GCN Architecture, Mantle, Exploit DirectX© 12, AMD CorssFire, Virtual Super Resolution, HD3D technology, Frame Rate Target Control, and AMD FreeSync technologies.

No word on pricing as of now but the PowerColor Devil 13 Dual Core Radeon R9 390 video card will be outrageously expensive given what it offers.