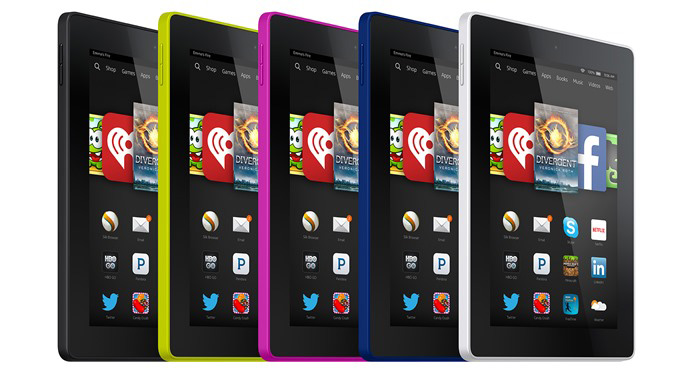 Despite the emergence of numerous tablets on the market in the past few months we haven’t heard anything from Amazon. Well, this is no longer the case as the company is back with a vengeance launching no less than five different tablets.

We’ll start with the new Fire HDX 8.9 tablet, which comes to compete with the iPad Air. The device comes with a lighter chassis, a fast, presumably quad-core, 2.5 GHz processor that includes a graphics processor that is 70 per cent faster than before, the latest Dolby Audio and Dolby Atmos technologies and the new Fire OS 4 Sangria operating system. The tablet also sports an impressive 8.9-inch HDX display with pixel density of 339 ppi, 100 per cent sRGB color accuracy and Dynamic Light Control technology. The device also has support for Wi-Fi and LTE.

The Fire HD tablet offers a quad-core processor, two cameras (one front and one rear) and an HD display. There are two versions of this tablet – one that features a six-inch display and another that comes with a 7-inch display. The smaller tablet costs USD 99, while the larger one sells for USD 139. There are five color choices – cobalt, magenta, citron, white and black.

There is a tablet for children too and this is the Fire HD Kids Edition – it has a quad-core processor, an HD display, front- and rear-facing cameras, Dolby Digital Audio and access to Amazon’s ecosystem of more than 33 million movies, TV shows, books, songs and Android apps and games. The device is available in two versions – a six-inch model (USD 149) and a seven-inch model (USD 189) and includes a year of Amazon FreeTime Unlimited for kids to get unlimited access to 5000 books, movies, TV shows, educational apps, and games at no additional cost.

Finally we have the Kindle Voyage that uses a new Paperwhite display with 300 pixels per inch. The display features some interesting technologies – it has specially strengthened glass that resists scratches. At the same time the glass is micro-etched to diffuse light and eliminate glare, ensuring that users can read text even in bright light with no glare at all. In addition to that the Kindle Voyage introduces PagePress, which is a new way to turn pages. The technology uses a custom force sensor that is situated right under the bezel. This allows users to rest their thumbs on the bezel and turn pages by lightly pressing. The Kindle Voyage comes with free 3G and sells for USD 199.

The new Kindle appears to be the simplest device of all five – it costs USD 79 and has a 20 per cent faster processor, twice the storage when compared to the previous model and a touch interface.