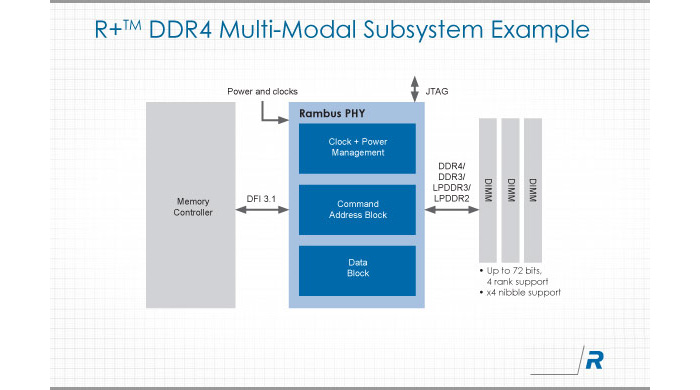 The infamous RDRAM designer and maker Rambus has created a new R+ DDR4/3 PHY interface that it has proudly presented. Designed along with Samsung the new Rambus interface comes built on 28 nm tech process and features low power consumption. It will be used in various system-on-chip solutions for small-sized and portable devices.

“With the ongoing demand for data alongside the cloud driving more and more networking, the need for faster speeds and better bandwidth has never been more prevalent,” said Kevin Donnelly, general manager of the Memory and Interface division at Rambus. “Successfully taping out a production-ready R+ DDR4/3 PHY on the Samsung 28nm LPP process is a major step in our strategic and valued partnership. Together we are breaking the necessary ground to achieve the best possible speeds and bandwidth required by today’s consumer and networking devices.”

The main feature of the new interface is that it comes with support for both DDR3 and DDR4 memory and therefore it can be used in numerous cases such as in servers, computers, user electronics and network equipment. The + DDR4/3 PHY interface is flexible – it can be used in both area/power optimized consumer applications and performance intensive compute applications. It also achieves data transfer rates that fall between 800 MB/sec and 3.2 GB/sec.