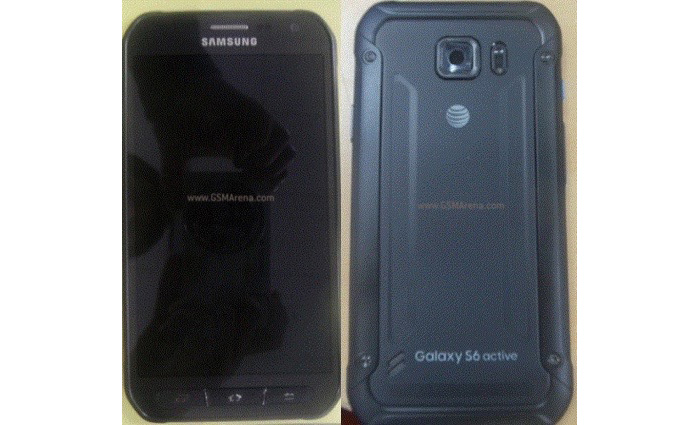 A few months ago when we reported on the then new Samsung Galaxy S6 we said there would be a version of the smartphone designed for active people and called Galaxy S6 Active. Well, the first pictures of this device have been published online and they show a Galaxy S6 Active smartphone that will be distributed in the USA by AT&T.

We won’t focus on the pictures much because you can see them with your own eyes and you know what the proverb says “A picture is worth a thousand words”. We’ll just say that the Galaxy S6 Active looks like the regular S6 a lot and it even includes most of the hardware found in the Galaxy S6. The new smartphone features a 5.1-inch display at 2560 x 1440 pixels, a Samsung Exynos 7420 processor, 3 GB of RAM, 32 GB of internal flash memory and two cameras – a rear 16 MP shooter and a 5 MP camera up front. There’s a more powerful battery, however – the Galaxy S6 Active comes with a 3500 mAh battery and when compared to the 2600 mAh one in the regular S6 you can see that this is a significant improvement. The ruggedness of the device has a price, though – the Galaxy S6 Active measures 146.9 x 73.6 x 8.8 mm and weighs more than the Galaxy S6.