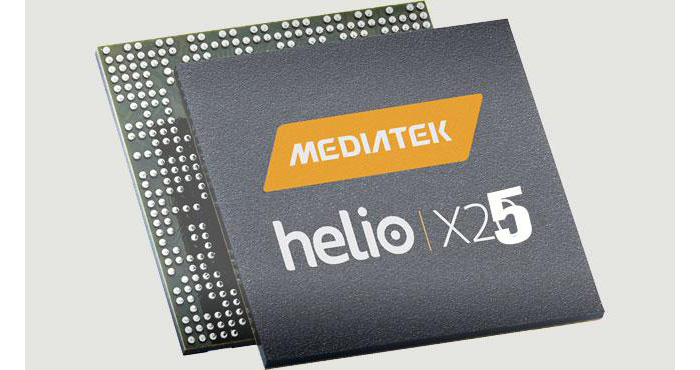 The maker of smartphone SoCs MediaTek has announced the new Helio X25 smartphone processor during a special press event. The chip will be used in the Meizu Pro 6 smartphone first.

The Helio X25 processor is an improved version of the Helio X20 chip. It features three clusters with two of them having four cores, while the last one has two cores for a total of ten processing cores inside the chip. The first and the second clusters have ARM Cortex-A53 cores that run at 2.0 GHz and 1.4 GHz, respectively, while the third cluster consists of two ARM Cortex-A72 cores that run at 2.5 GHz, which is an improvement, compared to the Helio X20, where the Cortex-A72 cores operate at 2.3 GHz. The so-called CorePilot 3.0 software commands the core loading and manages where data that needs to be processed will go. In addition to this the Helio X25 offers a faster Mali-T880 MP4 GPU that runs at 850 MHz. All other tech specs are the same as in the Helio X20 but despite the tech improvements the new chip does not consume more power compared to the older Helio X20 SoC. This means that the Helio X25 supports up to a single 25 MP camera or two 13 MP cameras, 2K and 4K video and the quick charging technology Pump Express 3.0+.

The new Helio X25 will be supplied exclusively to Meizu for the first several months after its market debut. A bit later the chip will visit other smartphone makers too.