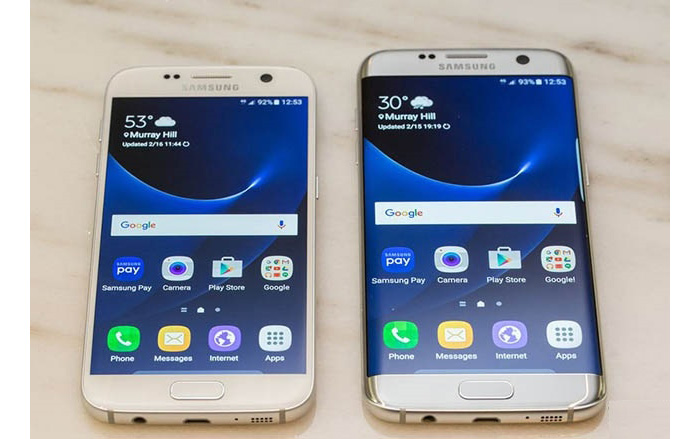 The two new smartphones feature a design that is similar to last year’s Galaxy S6 and S6 Edge handsets but the hardware specs have been refreshed. The Galaxy S7 comes with the same 5.1-inch display seen in the Galaxy S6, while the display of the S7 Edge has been updated to 5.5-inches. The devices are powered by a Snapdragon 820 processor or an Exynos 8890 chip (depending on where you live) and sport 4 GB of RAM, Adreno 530 graphics as well as 3000/3600 mAh batteries (S7 and S7 Edge, respectively).

The S7 and S7 Edge are made of metal and glass and feature new cameras that do not protrude that much compared to the older S6 and S6 Edge smartphones. The new devices also come with the new Always-on display function which eases users who want to see what time it is or the calendar. The devices are also rugged – they feature IP68 certification that allows them to spend up to 30 minutes underwater at depths of up to 1.5 meters. According to Samsung the new and more powerful hardware inside the S7 and S7 Edge brings 30.4 per cent more processor performance as well as 63.9 per cent more graphics performance compared to the S6 and S6 Edge smartphones. The integrated 12 MP camera deserves a few words – this advanced piece of hardware comes with a lower resolution than before but Samsung says the camera has pixels that can capture 56 per cent more light than before, which compensates the lower resolution. The camera lens also has a wider F/1.7 aperture and captures up to 25 per cent more light. Combined with the camera pixels, the new S7 camera can capture 95 per cent more light when compared to the S6 model. In addition the smartphones have a 360-degree camera that can show you everything that is around you.

The Galaxy S7 will be in stores on March 11 in both the USA and Europe but you can pre-order your new smartphone now. The S7 will come in black or gold colors, while the S7 Edge will feature black, silver or gold colors. No word on pricing as of now.