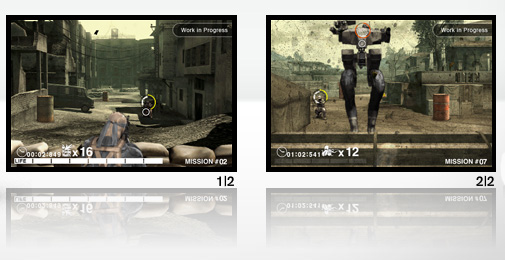 Developed by Kojima Productions and designed specifically for iPhone and iPod touch, Metal Gear Solid Touch covers the final chapter in the legendary saga of Solid Snake. Players join forces with Old Snake as he battles the money-driven mercenaries of Private Military Companies (PMCs), Haven Troopers, Gekko, and the beautiful yet terrifying bosses of the B&B Corps. This commercial warfare adventure follows Old Snake across the Middle East, South America, Eastern Europe, and Shadow Moses as he depletes his enemies’ stamina with various short-range and long-range weapons. Metal Gear Solid Touch also features twenty levels of gameplay and well-known antagonists from the past.

Metal Gear Solid Touch is available for $7.99 from Apple’s App Store on iPhone and iPod touch or at www.itunes.com/appstore/.

Konami is a leading developer, publisher and manufacturer of electronic entertainment properties. Konami’s titles include the popular franchises Metal Gear Solid®, Silent Hill®, DanceDanceRevolution® and Castlevania®, among other top sellers. The latest information about Konami can be found on the Web at www.konami.com. KONAMI CORPORATION is a publicly traded company based in Tokyo, Japan with subsidiary offices, Konami Digital Entertainment Co., Ltd. in Tokyo, Japan, Konami Digital Entertainment, Inc. in the United States and Konami Digital Entertainment GmbH in Frankfurt, Germany. Konami Corporation is traded in the United States on the New York Stock Exchange under the ticker symbol KNM. Details of the products published by Konami can be found at www.konami.com.