The CE4100 processor, formerly codenamed “Sodaville,” is the first 45nm-manufactured consumer electronics (CE) SoC based on Intel architecture. It supports Internet and broadcast applications on one chip, and has the processing power and audio/video components necessary to run rich media applications such as 3-D graphics.

“Traditional broadcast networks are quickly shifting from a linear model to a multi-stream, Internet-optimized model to offer consumers digital entertainment that complements the TV such as social networking, 3-D gaming and streaming video,” said Eric Kim, senior vice president and general manager, Intel Digital Home Group. “At the center of the TV evolution is the CE4100 media processor, a new architecture that meets the critical requirements for connected CE devices.”

Joining Kim on stage during his keynote were executives from Adobe Systems, BBC (British Broadcast Company), CBS, Cisco and TransGaming. These and other companies are working with Intel to advance content, services and infrastructure for connected CE devices.

As TVs become more interactive, Adobe Flash is an important enabling technology to help content developers blend together video, 3-D animation and rich graphics. Intel is working with Adobe to port Adobe Flash Player 10 to the family of Intel CE media processors to optimize the playback of graphics and H.264 video to enable for the first time a wide array of Flash-based content on the television. 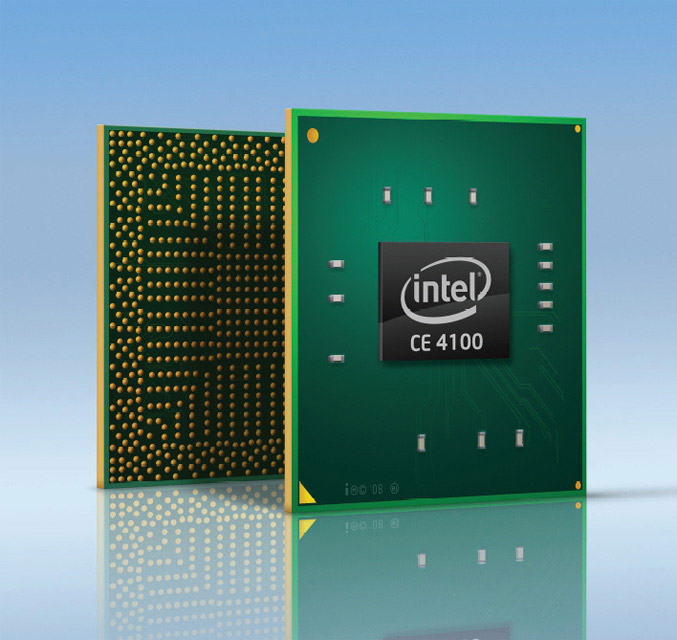 “Cisco is helping service providers evolve their networks to a medianet, integrating the best elements of the existing broadcast infrastructure with carrier-grade IP networks to provide new services like unified video experience,” said Moynihan. “The crucial components to enable a unified video experience include the need for an emerging monetization model across the video ecosystem as well as client devices with quality graphics and a high-performance processor to truly enhance the visual appeal for consumers.”

“At TransGaming, we’re in the business of enabling existing games to operate on alternative operating systems,” said Gupta. “Since Intel CE processors run on Intel architecture, it’s a fast and easy migration from the PC to the CE platform.”

The GameTree.tv service will offer a broad library of games such as sports, action and adventure and provide content developers with a software development kit to support the migration of existing games and the development of new games based on the Intel CE platform. It will help revolutionize the delivery and global consumption of video games and provide a turnkey monetization strategy for CE manufacturers and cable/satellite providers (MSOs).

Intel CE media processors provide a full-featured software framework called Widget Channel for the development of Internet applications, or TV widgets. Broadcast networks such as CBS are expanding the gallery of TV widgets to help their viewers find and connect to premium content in a more personalized manner.

“Navigation is the No. 1 challenge for today’s television viewers,” said George Schweitzer, president, CBS Marketing. “Intel’s CE technology and our new TV Widget platform are designed to help people find the shows they want and discover new programs that are relevant to their interests. What’s more, the TV Widget gives us another platform to connect and interact with our audience while delivering an exciting new television experience.”

The CE4100 processor can deliver speeds up to 1.2GHz while offering lower power and a small footprint to help decrease system costs. It is backward compatible with the Intel® Media Processor CE 3100 and features Intel® Precision View Technology, a display processing engine to support high-definition picture quality and Intel® Media Play Technology for seamless audio and video. It also supports hardware decode of up to two 1080p video streams and advanced 3-D graphics and audio standards. To provide OEMs flexibility in their product offerings, new features were added such as hardware decode for MPEG4 video that is ready for DivX* Home Theater 3.0 certification, an integrated NAND flash controller, support for both DDR2 and DDR3 memory and 512K L2 cache. The CE SoC contains a display processor, graphics processor, video display controller, transport processor, a dedicated security processor and general I/O including SATA-300 and USB 2.0. For more product information, visit www.intelconsumerelectronics.com.