At Computex 2016 after presenting the Radeon RX 480 video card, AMD has also announced its mobile Bristol Ridge processors that have been in the news feed for quite some time now.

The new chips, sadly, come with the older Excavator architecture instead of the eagerly expected Zen architecture but even then Bristol Ridge does not look that bad. AMD says that the new APUs are up to 56 per cent faster than the previous generation, while the graphics performance has been increased by 53 per cent compared to the integrated GPU in a mobile Intel Core i7 processor. The new processors are also up to 51 per cent faster in heavy calculation tasks than previous generation processors. In addition to this AMD has managed to reduce the power consumption – Bristol Ridge needs up to 41 per cent less power than before while playing a 1080p video. 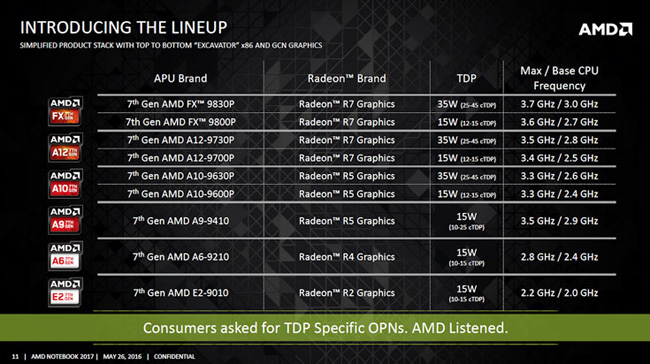 The new APUs will only be available in notebooks so you will not be able to purchase them freely. Notebooks with Bristol Ridge processors will appear soon by companies such as ASUS, Lenovo, HP and Dell.