The image of the Taiwanese motherboards manufacturer was tarnished earlier this month when a Taiwanese overclocker published a video on YouTube showing a Gigabyte X79-UD3 motherboard emitting smoke and then blowing a MOSFET during mild overclocking. At first many viewers thought it was just an accident but later other reports of smoking and exploding overclocked Gigabyte X79 motherboards showed up which prompted the manufacturer to start an investigation.

Indeed there’s a problem – the investigation has revealed a problem with four socket 2011 motherboards – the GA-X79-UD3, the GA-X79-UD5, the GA-X79-UD7 and the G1.Assassin 2. The problem is a combination of bad quality PWM components and a bad firmware and affects only the mentioned X79 motherboards while all other Gigabyte X79 models are free of the problem. Since then Gigabyte has released a quick fix in the form of a new BIOS that prevents burn outs by throttling the CPU when subjected to stress but this kills overclocking which is the main selling point of these expensive high-end motherboards. 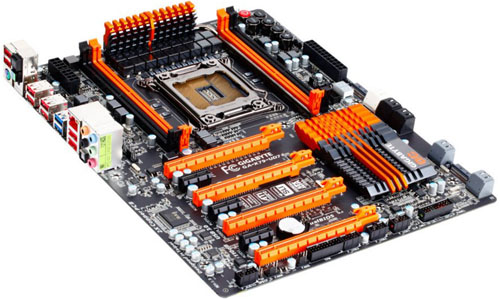 However Gigabyte remains committed to its customers and fans and suggests affected users update their BIOS and if not satisfied exchange the faulty motherboards when new unaffected ones become available. In the meantime all affected models have been pulled out of the market.

In case you own one of the affected motherboards feel free to contact your local Gigabyte dealer and arrange an exchange.