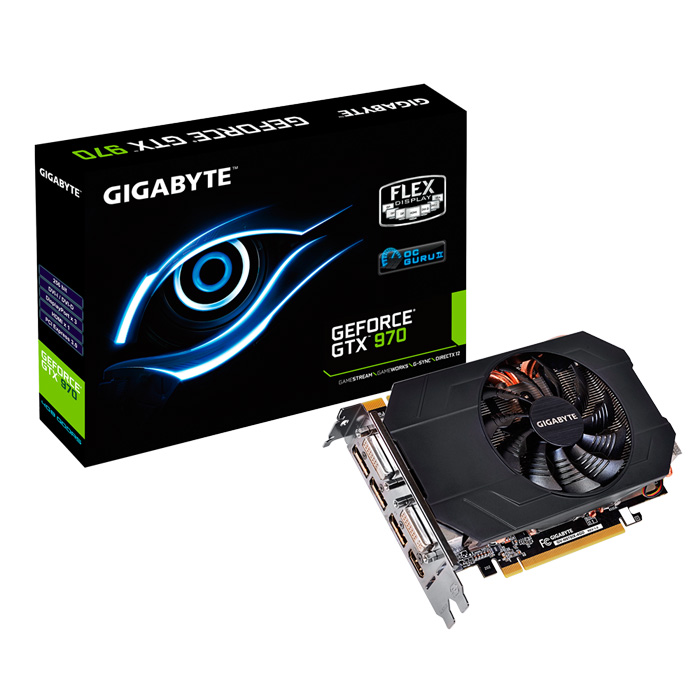 Gigabyte has taken the chance to present a new GeForce GTX 970 graphics card. While there are many such models on the market as we speak, the new Gigabyte product strikes with size – the new GTX 970 card is small-sized and can be even used in Mini-ITX systems.

The new card is called GV-N970IX-4GD and measures 183 x 129 x 43 mm. Just like other GTX 970 cards, the newcomer is based on the 28 nm GM204 Maxwell GPU that offers 1664 stream processors and 32 ROPs. The card also has 4 GB (3.5 GB + 0.5 GB) of GDDR5 memory with a 256-bit memory bus, three DisplayPort ports, as well as Dual-Link DVI-I, DVI-D and HDMI ports. The GPU runs at 1051 MHz (1178 MHz Turbo) while the memory operates at 7012 MHz effective. Furthermore in order to successfully run the card you must provide adequate power via an 8-pin power connector. The GV-N970IX-4GD is cooled by an 80 mm cooling fan that cools one 8 mm and two 5 mm heat pipes. According to Gigabyte the card has not gone above 62 degrees Celsius while being tested at Gigabyte’s factories.

The latest Gigabyte card is available now in the USA where it sells for USD 330.