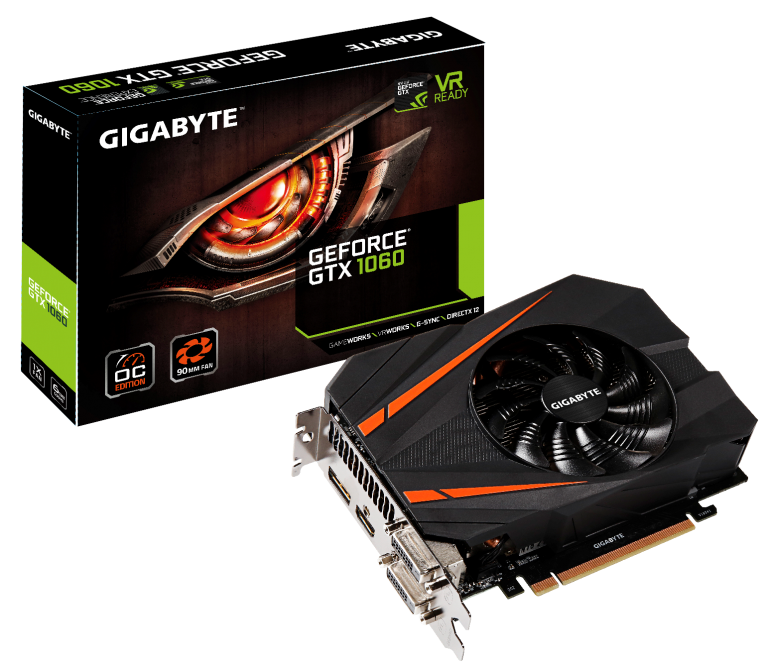 Gigabyte has prepared a new GeForce GTX 1060 video card that strikes with its small-size. In fact this is perhaps the main feature of the new Gigabyte product, which comes with the rather long GeForce GTX 1060 Mini ITX OC product name.

The new video card is just 169 mm long, which makes it perfect for people who build small form factor PCs. More importantly the new card has been designed for mini ITX motherboards. Interestingly enough, despite its small size the new Gigabyte video card comes factory overclocked. Unfortunately there’s little information on the components used and the PCB of the graphics card – all we know is that it has been exclusively designed by Gigabyte. Due to the factory overclock, however, the GeForce GTX 1060 Mini ITX OC comes with an additional 6-pin power connector that must be used when the card works. A 90 mm cooling fan plus two heat pipes provide cooling for the GPU. Speaking of this the GPU of the GeForce GTX 1060 Mini ITX OC runs at 1531 MHz/1746 MHz in Gaming mode and at 1556 MHz/1771 MHz in OC mode. The memory of the card has not been overclocked, however – the installed 6 GB of GDDR5 memory runs at 8008 MHz and a 192-bit memory bus feeds data to the GPU. At the back the card has two Dual-link DVI-D ports, one HDMI 2.0b and one DisplayPort 1.4 connectors.

The price of the GeForce GTX 1060 Mini ITX OC has not been announced.