The MSI N260GTX Lightning that is released in April has broken the world record by reaching incredible 1.1GHz GPU clock that no other GTX 260 cards can exceed. After N260GTX Lightning, MSI introduced the new N275GTX Lightning with Military Class components, 10 phase PWM, 1792MB GDDR3 memory, Twin Frozr II thermal design with SuperPipe technology, and several overclocking functions. The performance of MSI N275GTX Lightning is even faster than reference GeForce GTX 285 graphics cards, which prove its perfect design and best quality. 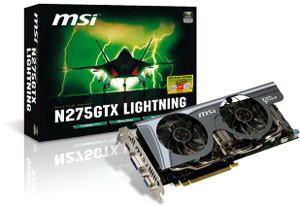 MSI N275GTX Lightning adopts Military Class components, including Hi-c CAP, SSC (Solid State Choke), and All Solid CAP. These components are all made of top quality materials and meet the temperature requirement of US Department of Defense. The core of the Hi-c CAP is made from a rare metal, Tantalum, which has extremely high stability like platinum ,and Hi-c CAP is widely used on NASA satellites and space shuttles in extremely bad environment. MSI N275GTX Lightning uses a lot of Hi-c CAP to provide the most stable GPU power supply and extend the lifespan of the components. 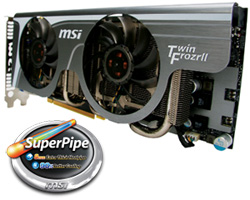 The key factor to effectively transfer heat is determined by the size of heatpipe. Therefore, MSI adopts SuperPipe technology to Twin Frozr II, the thickest 8mm heatpipe in the industry, and the cooling efficiency is 90% better than traditional heatpipe. The dual 8cm fans of Twin Frozr II are also bigger than last generation. Larger fan only needs low rotation speed to perform good cooling result, therefore noise is also reduced at the same time. Even Twin Frozr II is under full-speed operation, the generated noise is only 30db. Under all circumstances, the noise generated by fans is barely audible at anytime.

Different manufacture process has made GPU consumes more power than CPU, especially when overclocking the GPU. Without outstanding PWM module, overclocking potential of GPU will be limited by insufficient power output. By seeing this, MSI has made some improvements in last generation design and applied new 10 phases PWM design to MSI N275GTX Lightning. Now GPU power is 100% provided by two external powers and has substantially increased power stability, and overclocking performance.

MSI exclusively implemented APS (Active Phase Switching) into N275GTX Lightning. APS can automatically adjust power phases according to its loading and shut down unused 7 phases when the system is in idle mode. Besides power saving, power efficiency can be increased up to 93%. Green, blue, and red LED lights are on the back of MSI N275GTX Lightning to indicate low, medium, and high loading status. Users can easily monitor power loading through the LED lights.

In the MOA (Master Overclocking Arena) competition hosted by MSI last year, all contestants suggested MSI to implement a convenient tool, V-Check Points. Overclockers have to monitor graphics card’s voltage all the time. They have to search for contact points in complex circuit that can check GPU and memory’s voltage. On Lightning series, two sets of V-Check Points have been implemented. The voltage of GPU and memory can be measured easily through the multimeter, and the additional voltage measurement cable is also bundled in MSI N275GTX Lightning to provide better user experience.

Lightning Afterburner is overclocking utility designed especially for Lightning series. GPU voltage, GPU and memory clock, and fan speed can be adjusted in Windows environment. Users can overclock easily through this utility and dramatically increase the performance of MSI N275GTX Lightning.

Same as MSI N260GTX Lightning, MSI N275GTX Lightning is equipped with 1792MB high speed memory (0.8ns GDDR3). Larger memory is always better for high performance graphics cards. Recent PC games use a lot of 3D special effects to perform the realistic experience, for example, GTA4 (Grand Theft Auto 4) requires more than 1.5GB memory when all effects are turned on to maximum settings. Except for MSI Lightning series, even the standard GTX 285 cannot run this game with such high requirement.

With advanced Military Class components, 10 phase PWM design, Twin Frozr II thermal design, 1792MB memory, and Lightning Afterburner utility, the performance of MSI N275GTX lightning is faster than reference GeForce GTX 285 graphics cards. All in all, MSI N275GTX Lightning is the best choice for gamers and overclockers who are looking for extreme performance and best quality.

MSI has come out with another F-series notebook, but this time powered by AMD Vision Ultimate platform with Phenom II three-core CPU and also comes with the standard for the series multimedia features. The FX610 laptop,  of course like his brothers comes with MSI’s new raised totem seal...

Gelid Solutions, a company, which specializes in CPU cooling solutions, has launched a new CPU cooler known as Siberian Pro. The new product is an upgrade to the year 2011 model Gelid Siberian. The Siberian Pro is made of a compact premium aluminium heatsink that gets... 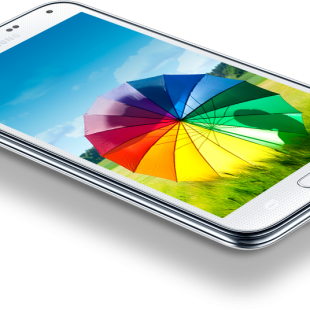 The Samsung Galaxy S5 was unveiled a few months ago but Samsung already has a “Neo” version of it. Despite the fact that this new smartphone is not on the market now we do know its specs thanks to yet another leak on the Internet. The information, which was again taken from the GFXbench...