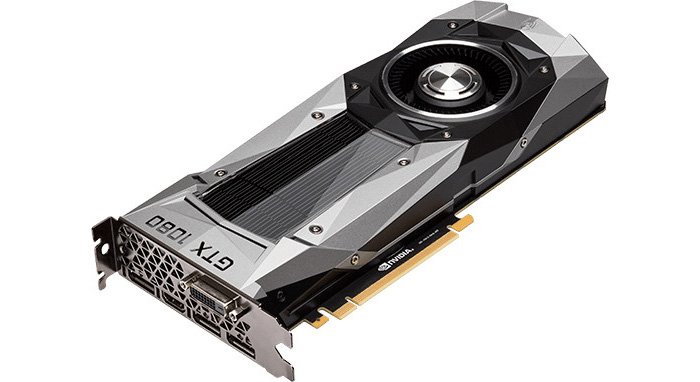 So the GTX 1080 is based on the all-new GP104 Pascal GPU, which contains the staggering 7.2 billion transistors. The chip is made on a 16 nm FinFET process and comes with four graphics processing clusters for a total of 2560 CUDA cores. The chip runs at the awesome 1607 MHz with a Turbo Boost speed of 1733 MHz. During the announcement of the GTX 1080 NVIDIA also demonstrated the GP104 GPU running at 2100 MHz on air with the chip reaching just 67 degrees Celsius but your results may vary. In addition to this the card comes with 8 GB of GDDR5X memory that runs at 2500 MHz (10 000 MHz effective) and that pushes 320 GB/sec of data over a 256-bit memory bus.

The new GeForce GTX 1080 video card fully supports DirectX 12 (feature-level 12_1), OpenGL 4.5 and Vulkan. The card is 10.5 inches long and takes two slots. It needs 180W of power and comes with a single 8-pin power connector. In the back the GTX 1080 features three DisplayPort 1.4 connectors, one HDMI 2.0b port and an additional dual-link DVI port. In addition to all this the GTX 1080 features an improved SLI technology thanks to the new SLI HB (high-bandwidth) bridge standard. Basically the new technology offers a 2-way SLI bridge in which both SLI fingers of the card are used. This doubles the memory bandwidth between the two cards, which allows for higher display resolutions and multi-display setups between high-resolution monitors.