Radeon R9 380X will likely come out in November

A few days ago several sources on the Internet, including us, spread the news that the expected Radeon R9 380X would come out in October of this year. It turns out that the card, however, will likely appear in November.

There’s no information why there will be such a delay (or there might be no delay at all) but if it happens this will not be good news for AMD fans who will have to wait for a few more weeks to get this promising card. Speaking of it, the Radeon R9 380X will come with a Tonga GPU that in this case will carry the Antigua code name. The card is expected to come with 2048 stream processors, 128 texture mapping units and 32 raster operation units. The GPU will run in the 1000-1100 MHz range with factory-overclocked models coming with increased frequencies. In addition the R9 380X will offer strictly 4 GB of VRAM memory, while the R9 380 has versions with 2 GB or 4 GB of RAM. As usual the R9 380X will sport GDDR5 memory that will run around 5600-6000 MHz and that will be serviced by a 256-bit memory bus. The display options of the card will include Dual-Link DVI, HDMI 1.4 and DisplayPort 1.2. The R9 380X is expected to come with TDP of 200-250 watts and to feature AMD’s GCN 1.2 chip architecture that supports Color Compression, Vulkan API and DirectX 12.

The new card will cost around USD 249. This is a price range where NVIDIA does not have a competitor so we might get a new NVIDIA Maxwell-based video card by the end of the year. 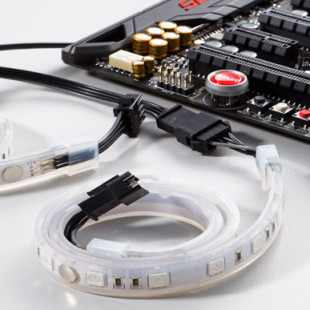 Case modding has reached new heights thanks to the efforts of Phanteks – a company known for making computer hardware accessories. Now Phanteks has new RGB LED strips for all fans of fancy looking cases. The strips are called RGB LED Strip Combo Set and RGB LED Strip 400MM and both of them...

Here’s a fun gadget to store all your data on, the Ninja USB Drive. What's the difference between a dead skunk in the road and a dead ninja in the road? -There are skid marks before the skunk Here is another :) If you are stranded on a desert island with Adolph Hitler, Atilla the Hun...