Toshiba gets back on hard drive market

Toshiba has gotten back on the hard drive market with the release of 12 (!) new drives. When taking a closer look though you’ll see that the Japanese company has four different models in three different sizes. Half of the new drives are equipped with a streaming function for data transfers within a specific timeframe, which are optimised for applications such as digital video recorders.

All new drives use SATA 3.0 and have a six-gigabit per second transfer rate. Half use a rotational speed of 7200 rpm and have a 64 MB buffer, while the others have a buffer of 32 MB and speeds set between 5700 and 5940 rpm. The lower speeds are claimed to reduce power consumption by between 19 and 25 percent, while a further rotation speed reduction mode can lower consumption by over half when idling. A “silent seek mode” also reduces drive noise by up to 2 dB. 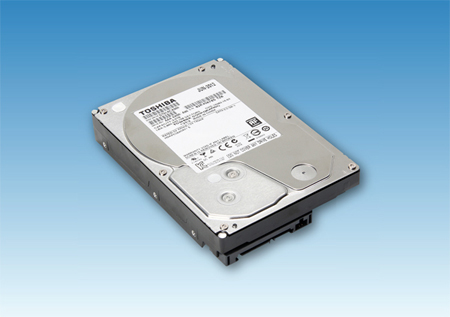 Volume shipments for the drives will start at the end of this month, suggesting the 3 TB, 2 TB, and 1.5 TB drives will be on sale at the start of September. Prices are currently unknown.