Tilera® Corporation today announced its new TILE-Gx™ family – four new processors from Tilera including the world’s first 100-core processor: the TILE-Gx100™. The TILE-Gx100 offers the highest performance of any microprocessor yet announced by a factor of four. Moreover, the entire TILE-Gx family raises the bar for performance-per-watt to new levels with ten times better compute efficiency compared to Intel’s next generation Westmere processor. And Tilera has simplified many-core programming with its breakthrough Multicore Development Environment™ (MDE) together with a growing ecosystem of operating system and software partners to enable rapid product deployment.

The TILE-Gx family – available with 16, 36, 64 and 100 cores – employs Tilera’s unique architecture that scales well beyond the core count of traditional microprocessors. Tilera’s two-dimensional iMesh™ interconnect eliminates the need for an on-chip bus and its Dynamic Distributed Cache (DDC™) system allows each cores’ local cache to be shared coherently across the entire chip. These two key technologies enable the TILE Architecture™ performance to scale linearly with the number of cores on the chip – a feat that is currently unmatched.

“”The launch of the TILE-Gx family, including the world’s first 100-core microprocessor, ushers in a new era of many-core processing. We believe this next generation of high-core count, ultra high-performance chips will open completely new computing possibilities,” said Omid Tahernia, Tilera’s CEO. “Customers will be able to replace an entire board presently using a dozen or more chips with just one of our TILE-Gx processors, greatly simplifying the system architecture and resulting in reduced cost, power consumption, and PC board area. This is truly a remarkable technology achievement.”

Leading the Evolution to Many-Core

Tilera’s breakthroughs in scalable multicore computing are changing the model of computing. Many-core processors enable a wide range of new opportunities including

“At various points in microprocessor history there have been breakthroughs that have enabled significant advances in computing, such as when the barrier of single-core clock speed was overcome by the introduction of multicore,” said Sergis Mushell, principal research analyst, Gartner. “Cloud computing and virtualization have ushered in a new era of processing power optimization and utilization, which has accelerated the roadmaps for multicore architectures and changed the paradigm from a clock frequency discussion of the past to a new discussion about number of cores and core optimization.” 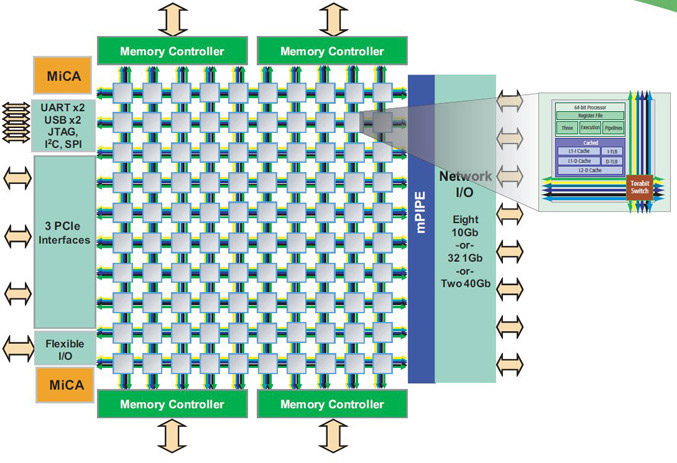 About the TILE-Gx Processor Family

The TILE-Gx family, fabricated in TSMC’s 40 nanometer process, operates at up to 1.5 GHz with power consumption ranging from 10 to 55 watts. Like the TILE and TILEPro™ processors, the TILE-Gx family incorporates many cores on a single chip together with integrated memory controllers and a rich set of I/O. However the TILE-Gx device also brings together a number of new features to maximize application performance while offering the best performance-per-watt in the industry. Some of the technology highlights include:

The TILE-Gx processor family is ideal for a wide range of markets including enterprise networking, cloud computing, multimedia and wireless infrastructure, with the TILE-Gx16™ targeting more cost-sensitive applications and the TILE-Gx100 targeting performance applications.

The TILE-Gx36 processor will be sampling in Q4 of 2010 with the other processors rolling out in the following two quarters.