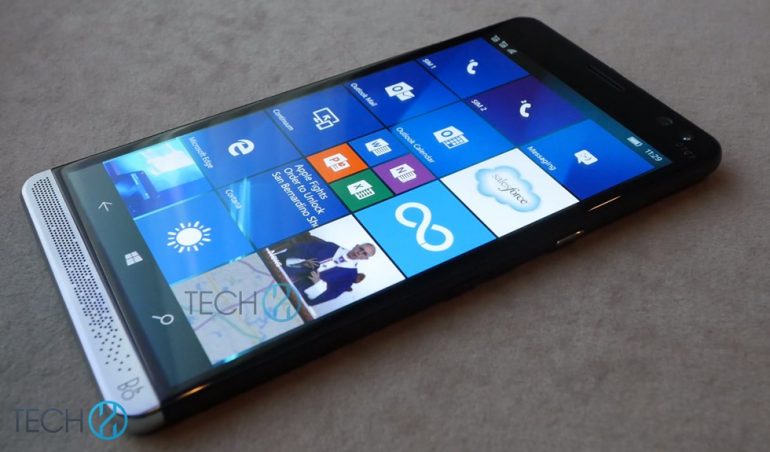 HP has been all about computers and peripherals for decades but new information published two months ago mentioned something interesting – the US corporation was planning to make one more attempt to establish itself on the smartphone market with a new device riding high on the hot new Windows 10 Mobile platform. Codenamed Falcon the smartphone was scheduled for this year but nothing more was known. Fast forward to February 2016 and you will find out that the Falcon smartphone may arrive any time soon.

A Hungarian web site has not only listed the tech specs of the Falcon smartphone but has also published images of it. The device is actually called Elite X3 and belongs to the phablet category since it comes with a rather large display. The smartphone looks more than promising – it uniquely blends plastic and metal elements into a really cool looking chassis and the tech specs should not be underestimated – according to this preliminary information the HP Elite X3 packs a Qualcomm Snapdragon 820 processor, 4 GB of RAM, a 6-inch display at QHD resolution and 32 GB of internal memory that can be expanded with a microSD card (up to 200 GB). In the back the phablet comes with a 16 MP rear camera, while up front it has an 8 MP shooter. The Elite X3 will treat you with a USB Type C charging/data port, a fingerprint scanner, Qi wireless charging, IP67 dust/water resistance and a MIL-STD-810 certification for ruggedness against drops, shock and other such events. And to finish it all – the Elite X3 even supports Continuum and runs Windows 10 Mobile.

All these specs make the HP Elite X3 a really elite smartphone. Interested? Then you should have to wait until MWC 2016 next week when the device will be officially unveiled and priced.