As might be you know, a 3D image is created by providing slightly different images to your left and right eyes. There are two methods of separating a picture into left and right images: one uses special glasses, and the other is without glasses, called auto-stereoscopy. The with-glasses approach is applied to movies and TV, and there are two primary methods: one uses polarizing filters, and the other is based on time division. 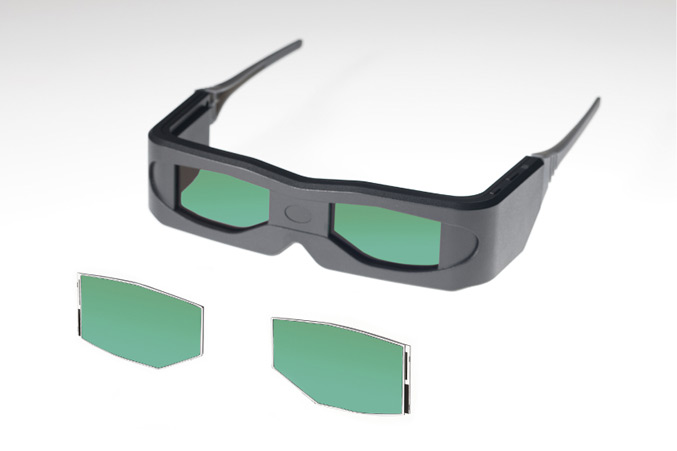 The new liquid crystal display panel developed by Toshiba employs the latter time-based, with-glasses approach.  “In the time-division with-glasses method, images for the left and right eyes appear alternately, with the special glasses working as a synchronous shutter. That is, when the left image appears, the left liquid crystal shutter opens while the right shutter closes. When the right image appears the right shutter opens while the left shutter closes. Repeating this operation at high speed allows the user to synthesize the left and right images in their brain and to recognize them as a 3D image.

In this new liquid crystal display panel, suitable for application in a pair of glasses, TMD has used OCB technology to achieve both high-speed response and a wide viewing angle while maintaining high contrast. Glasses adopting these panels feature high-speed shutter opening and closing, yielding a significant reduction in 3D crosstalk. In addition, the wide viewing angle provides vivid 3D images across a wide field of view, such as in movie theaters and living rooms. Glasses adopting these panels would allow the viewer to enjoy high-quality 3D images in comfort with minimized fatigue when watching TV, viewing a movie, or playing a game for a long time.”

Toshiba America Electronics Components, Inc. will showcase this display in booth #631 at SID 2010 International Symposium, Seminar, and Exhibition, from May 25 to May 27, 2010, in Seattle, Washington, USA.