Apple announced the release of AirPrint wireless beta for iPad, iPhone and iPod Touch devices. The AirPrint Wireless Beta will be available for Apple iOS Developer Program members. AirPrint will be also included in the next free iOS 4.2 software update, which is coming in November.

“AirPrint is Apple’s powerful new printing architecture that matches the simplicity of iOS—no set up, no configuration, no printer drivers and no software to download,” said Philip Schiller, Apple’s senior vice president of Worldwide Product Marketing. “iPad, iPhone and iPod touch users can simply tap to print their documents or photos wirelessly to an HP ePrint printer or to a printer shared on a Mac or PC.”

Apple’s AirPrint Wireless has the ability to automatically detect printers on the near local networks, and print text, photos and graphics on them over Wi-Fi. The ePrint enabled printers by Hewlett Packard will be the first devices that will support “printing detect” on the iOS devices by Apple. 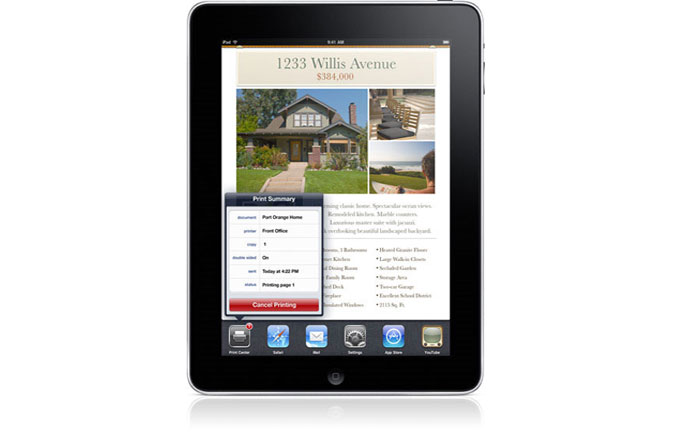 Designed to support a wide range of printers, AirPrint Wireless also offers the ability for iOS 4.2 devices to print to printers that are shared through a Mac or a PC. The next iOS 4.2 will be compatible with HP Photosmart, Officejet, Officejet Pro and LaserJet Pro ePrint enabled printers.