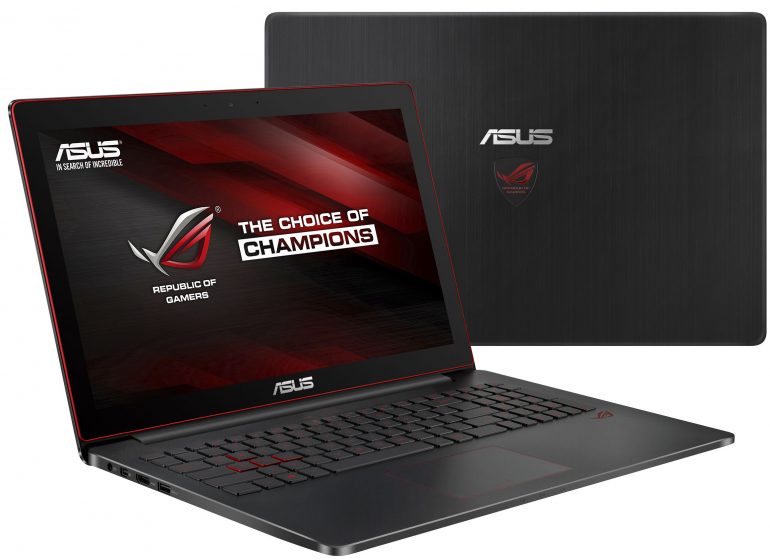 ASUS has nicely surprised gamers with a new ultra slim gaming notebook that goes by the name of G501. Quite naturally the new ASUS product belongs to the company’s high-end Republic Of Gamers (ROG) line but the main perks of the G501 are elsewhere – apart from powerful hardware the notebook boasts a very slim chassis that is just 20.6 mm tall. The weight of the G501 is also very low – the device weighs just 2.06 kilograms, which makes it ideal for gaming on the go.

You won’t be surprised if we say that the G501 comes with premium hardware – the notebook sports a very beautiful chassis in red and black and offers a lightweight aluminum construction, red bezel accents, a red-backlit keyboard with just 1.6 mm of key travel, marked WASD keys and a numeric keypad. ASUS has not made compromises with the display either – the G501 will treat your eyes with a 15.6-inch 4K UHD display with 8.2 million pixels for unrivalled visuals and the best eye candy ever. The display also offers 178-degree viewing angles, ASUS Splendid technology for better color brightness, contrast and sharpness, and finally a built-in HD camera.

Inside the G501 offers an Intel Core i7-4720HQ Haswell processor, and the just announced NVIDIA GeForce GTX 960M graphics card with up to 4 GB of GDDR5 memory. The notebook can also be fitted with PCI-Express x4 solid-state drives that can provide data transfer speeds of up to 1400 MB/sec, which is two times faster than SATA 3.0 SSD and sixteen times faster than regular SATA 3.0 hard drives. The ASUS G501 also has Intel Thunderbolt technology for data transfer speeds of up to 10 Gbit/sec, which is two times faster than what USB 3.0 offers.

Games tend to load hardware to the fullest, which generates unwanted heat but ASUS has thought of this issue as well – the G501 comes with the exclusive Hyper Cool technology. This is an advanced cooling system that has two cooling fans and copper heat sinks to remove excessive heat at the lowest noise levels possible. Furthermore both the GPU and the CPU are independently cooled, which ensures maximum efficiency.

Windows Blue will bring back the Start Button for sure

No word on pricing as of now but we expect the G501 to be a rather expensive gaming notebook.