AMD describes the naming scheme behind the Radeon RX 480 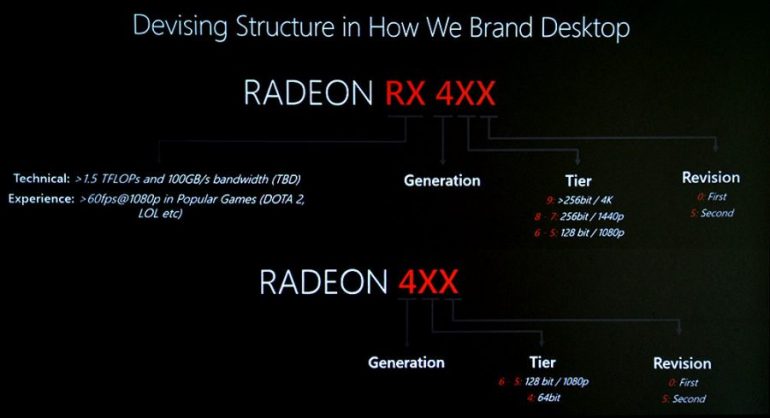 With the first Polaris-based video card – the Radeon RX 480 – AMD has changed the naming scheme of its video cards once again. Gone are the days or having two lines – the R9 and R7 – and a number of graphics cards inside them. Instead AMD now proposes a simpler way to remember its cards.

So starting now AMD will have two video card lines – Radeon RX and simply Radeon. The Radeon RX line will be occupied by cards, which feature at least 1.5 TFLOPS of computing power and more than 100 GB/sec of memory bandwidth. In addition all these cards must provide at least 60 FPS at Full HD resolution with Dota 2 and LOL being taken as example games. If there’s a video card that does not meet both of these requirements, it will not get the RX moniker. Then the first digit in the Radeon number shows the generation, the second digit shows the memory bus width, while the last third digit represents the revision. This also applies to video cards without the RX moniker in their names. Thus the Radeon RX 480 is a 4th generation video card with a 256-bit memory bus and recommended resolution of 1440p.

The new naming rules are immediately applicable so we will live with them for years to come. This is good news, though, as now AMD’s video card names are less confusing.

Huawei works on own mobile OS