Whether it’s scrolling down your favourite blog, ‘jogging’ through video footage like a pro, or zooming another world in a game; the Orbita® Mouse will revolutionize your experience.

Push, squeeze and spin your way to a better navigation experience with the new Orbita Mouse. By rethinking the scroll wheel we’ve been able to ease strain on your hand and give you scrolling control that other mice don’t.

No more 1,2,3 scrolls, page jumps or grabbing the scroll bar to get where you want in a document. With the Orbita you simply rotate continuously until you’ve found what you want.

And it’s not just long documents that become easier to deal with, music and video apps will be a breeze with the ability to turn volume knobs more naturally or jog through video footage like a pro; and what about zooming through Google Earth, a 3D app or a gaming environment without having to stop until you’re ready?

The Orbita Mouse works on the desktop or a mouse pad just like a normal mouse, except that you can spin it and use it an any angle.

The top small white arrow button is the orientation button. Pressing this button while the arrow points forwards on your desktop sets that as the ‘up’ direction for pointer movement on screen no matter how the mouse is rotated. This only needs to be done once for any particular desk or working environment.

The mouse can be rotated with one finger like a video or audio ‘jog wheel’ or you can ‘flick’ it and it will spin freely. You can continuously rotate the mouse this way, unlike with a mouse scroll wheel. Rotating the mouse needs only a very light touch.

Because the mouse can be used at any angle you can also use the buttons at any angle. There is one ‘push’ button which can be operated from any part of the top of the mouse, and a series of ‘squeeze’ buttons which also work from any angle to give a ‘right click’.

The third ‘Jog dimple’ button can be used like the dimple on a jog wheel to rotate the mouse. This button can work like the scroll wheel button on a standard mouse or switch to left-right scrolling when pressed. 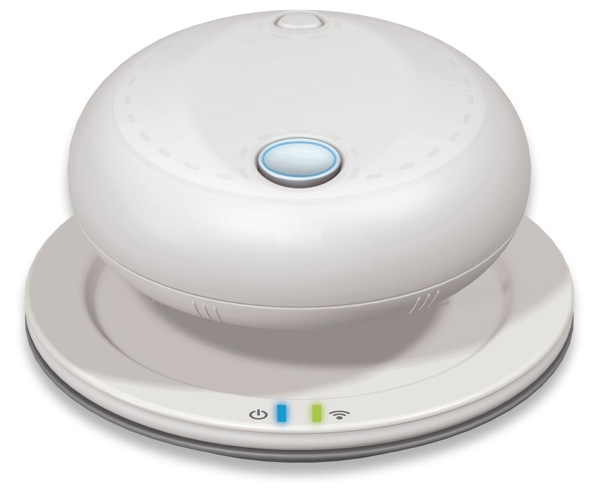