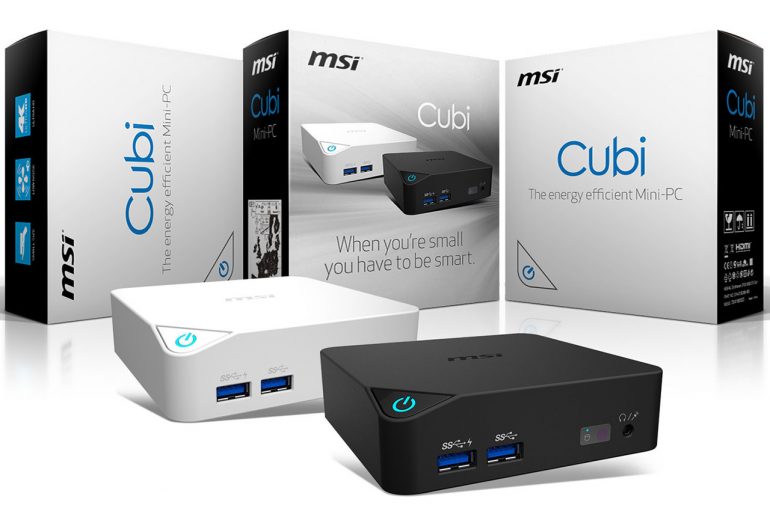 MSI has announced a new mini PC that goes by the trade name of Cubi. The new mini PC is designed for people who want to have powerful yet small-sized computers for both work and entertainment.

The main feature of Cubi is the small size – the machine is housed in a chassis that can hold up to 0.45 liters of water (this is really small – Cubi looks like a small lunch box). MSI calls Cubi the smallest PC in its kind yet it can provide users with all the elements and power of a desktop-sized computer. Cubi comes with a range of 14 nm Intel Broadwell processors – Celeron 3205U, Pentium 3805U, Core i3-5005U or Core i5-5200U – and this allows it to consume less than 15 watts of power. The computer depends on the Intel HD GPU in the Broadwell processors and comes with 4 GB of DDR3L-1600 memory that can be expanded to 8 GB. The PC supports mSATA and 2.5-inch hard drives so users will be able to enjoy all the storage capacity that they need. Cubi also sports Wi-Fi 802.11ac, Bluetooth 4.0, four USB 3.0 ports, an RJ-45 jack, a HDMI port, and a MiniDisplay port.

MSI has provided Cubi with Intel vPro technology for commercial applications so users can be sure in their safe and easily manageable working environment. Furthermore Cubi supports Ultra High Definition content and VESA standards so it can be mounted onto a wall.

Cubi will be available in two versions – black and white – by the end of March 2015. No word on how much a Cubi mini PC will cost.