Toshiba has officially announced that it will launch a new series of high performance SDXC and SDHC memory cards that will carry the brand name EXCERIA. According to Toshiba the new EXCERIA memory cards will bring to market the best performance available today.

The EXCERIA moniker, in case you are wondering, is a combination of “excellent” and “experience”. These memory cards will offer full compliance with the SD Memory Card Standard Ver.3.0 UHS-I and will be launched in April in Japan first.

The SD memory card has emerged as the data storage card of choice in all kinds of personal digital equipment. As the performance of digital equipment has advanced, SD memory cards offering faster data transfer speeds are necessary to support such functions as recording HD movies, continuous image shooting with digital camera and short transfer times when copying data to other devices. 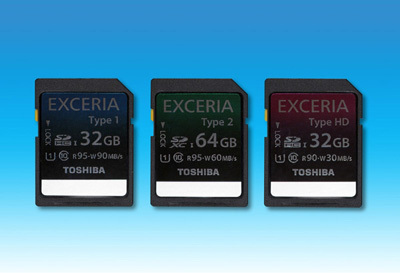 Pricing is not known at the moment.