“The coupling of GPUs and CPUs illustrates the enormous power and opportunity of multicore co-processing,” said Dan Reed, corporate vice president of Extreme Computing at Microsoft. “NVIDIA’s work with Microsoft and the Windows HPC Server platform, is helping enable scientists and researchers in many fields achieve supercomputer performance on diverse applications.”

NVIDIA Research developed several GPU-enabled applications on the Windows HPC Server 2008 platform, such as a ray tracing application that can be used for advanced photo-realistic modeling of automobiles. Related to this, NVIDIA worked with Microsoft Research to install a large Tesla GPU computing cluster and is studying applications that are optimized for the GPU.

In addition, a whole range of enterprise applications – such as data mining, machine learning and business intelligence, as well as scientific applications like molecular dynamics, financial computing and seismic processing – are taking advantage of the massively parallel CUDA™ architecture on which NVIDIA’s GPUs are based to achieve higher levels of productivity. 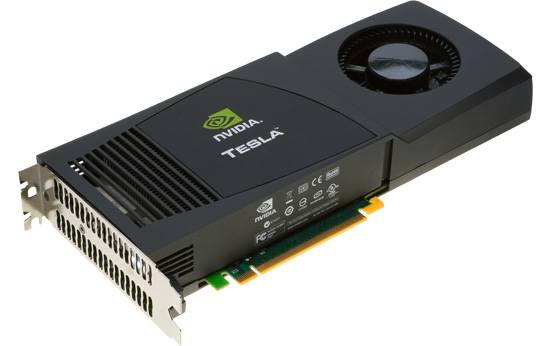 The CUDA architecture enables developers to use the CPU and the GPU together in a co-processing model. Compute-intensive sections of an application use the parallel computing capabilities of the GPU, while the sequential part of an application’s code runs on the CPU.

“The combination of GPUs and the Windows platform has been a great benefit to our VMD (Visual Molecular Dynamics) user community, bringing advanced molecular visualization and analysis capabilities to thousands of users,” said John Stone, senior research programmer at the University of Illinois Urbana-Champaign. “As we move toward even larger biomolecular structures, GPUs will become increasingly important as they bring even more computational power to bear on what will be highly parallelizable computational problems.”

“The scientific community was one of the first to realize the potential of the GPU to transform its work, observing speedups ranging from 20 to 200 times while using a range of compute-intensive applications,” said Andy Keane, general manager of NVIDIA’s Tesla business. “Researchers are increasingly using Windows on workstations and in data centers due to strong development tools like Microsoft Visual Studio, its ease of system management and its lower total cost of ownership.”