Intel, ASUS, EVGA, Gigabyte, and MSI to Offer Core i7 and Core i5 Motherboards with Full Support for NVIDIA SLI Multi-GPU Technology.

NVIDIA Corporation today announced that Intel Corporation, and the world’s other leading motherboard manufacturers, including ASUS, EVGA, Gigabyte, and MSI, have all licensed NVIDIA® SLI® technology for inclusion on their Intel® P55 Express Chipset-based motherboards designed for the upcoming Intel® Core™ i7 and i5 processor in the LGA1156 socket. As a result, customers who purchase a validated P55-based motherboard and Core i7 or Core i5 processor when available can equip their PCs with any combination of NVIDIA® GeForce® GPUs, including Quad SLI, for the ultimate visual computing experience. 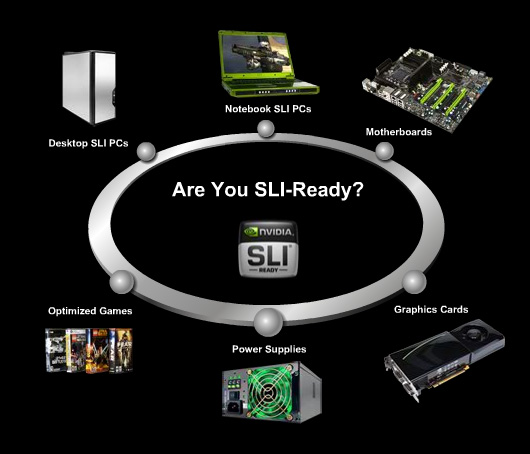 “NVIDIA SLI technology is a perfect complement to the processing prowess of our new Core i7 and Intel DP55KG desktop board,” said Clem Russo, VP and General Manager of Intel Client Board Division at Intel Corporation. “NVIDIA and Intel share a combined passion for furthering the PC as the definitive platform for gaming, and this combination will surely be attractive to anyone building or purchasing a brand new PC this fall.”

As a result of today’s announcement, NVIDIA SLI technology is now available for all consumer PC platforms, including the Intel Core i7, Core i5, Core 2 Quad and Core 2 Duo processors, as well as those based on the AMD Phenom II CPU. In addition to raw graphics performance, NVIDIA GeForce GPUs also provide gamers with additional capabilities not found on any other discrete graphics solutions, including NVIDIA® PhysX® technology for deeper gaming immersion, and stereoscopic 3D gaming with NVIDIA® 3D Vision™ technology.